My Other Grandfather "Tom" 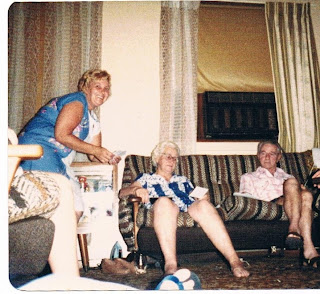 On Tuesday I wrote about my nan and today I am writing about my grandfather, not nan’s husband but my dad’s father.  Richard Thomas Jenkins11, he was always called Tom but unlike the memories I have of my nan the memories of Tom also called “Poppy Jenkins” are not the best ones…………….

So if anyone tells you those negative comments to children do no harm I am telling you they are wrong because all these years later these comments still bother me.

So a little about Tom he was born on the 7th April 1917 and died on the 24th May 1991 Tom was a coal miner from a very early age for a short period in about 1950 he worked for the SNOWY MOUNTAINS HYDRO- ELECTRIC SCHEME, stationed at Tumit Ponds, my dad remembers being with his dad at that time.

Tom was never a loving and generous man, well I do not remember him in that way, although he was extremely fond of his daughter in-law Mavis who he always thought of as just another daughter and it was mum who was there for him during the last years of his life.

I have enclosed two photos of Tom they are not the best photos but they were all I could find. 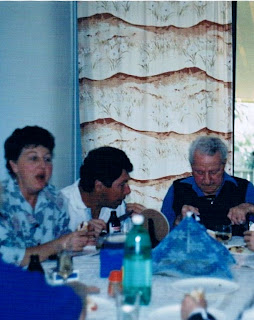 You are right- the hurtful things said to a child can fester for a lifetime. I am glad you have your loving Nan and Mom and Dad to undo some of that~

Jo-Anne, I don't understand why some people are determined to make others miserable. It's a sad fact of life. I guess all we can do is enjoy and be grateful for the folks who are kind to us.

It's amazing to me the staying power of words said many decades ago. In fact, I can remember most of them. And a few of them were hurtful from people long since dead. In fact, one of the most memorable (?) ones I can recall is the reaction my father gave me when he saw my grinning face on a third grade picture: "You look like a raped ape." Yep, that one's a keeper. Dad was a charmer.
Which is why I am careful, very careful, what I say to my own kids.

Words stick in ones mind at times especially when they are not nice ones, even as a child, teenager and adult. Don't know why some people have to be so nasty.
However, you said he was a kind man and it's with this thought in my mind that I will keep of your fathers father.

This post resonated with me deeply. My mom said some really hateful things as I was growing up. Her favorite, "you're a selfish bitch". Classic. It made me make sure I never said anything remotely similar to my own kids, ever.

It was just the way Tom was and his sister my Aunty Joyce was often the same way........thing it ran in the family although my dad is nothing like them

Thank you please you liked it

You're so right. People remember the hurtful, cruel things that they are told as children. They'll remember the neglect, the abuse...but they will also remember the kindness and the love. We need to spread more love. :)

We seem to hold onto those hurts. I think it's because they are so memorable because of the hurt. I have learned to let go of those things, because in the end that baggage is way to heavy to carry around and it's a burden I do not need. The fact that you have loving family to help mitigate that is great. Hugs to you, Susan