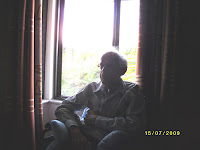 Ronald Francis James was born 10th October 1925 in Wickham. He served in the Airforce during WW11, he had to enlist twice because he was underage and the first place realised he was underage and kicked him out so he went somewhere else and enlisted again. He had a fake birth certificate saying he was born on the 10 April year unknown.

He married my grandmother Florence Torrens Townsend on the 28 December 1950 at a church in Hamilton. My mum was 10 at the time and she always considered him he dad and not her step father. Mum and him had a close relationship for many years. Yes there was a time when my girls where young that he wanted nothing to do with us but that passed and he in fact didn’t remember that time during the later years of his life.

He and nan had only 1 child a son Francis.

Up until the 8th June 2010 he was living at his home with my grandmother who has Alzheimer’s and was taking care of her. He would also walk to Charlestown Square and home a couple a times a week.

On the 8th he went to the doctors and was sent to hospital for tests and never went home again. He was diagnosed with Asbestos Cancer which is an aggressive cancer

He passed away on the 4th November at 4am. His funeral was held at St Albans Church in Charlestown.

May he rest in peace.