Today I finaly bought my Mother's Day presents from Tim I got a new camera as the other one packed it it and I also bought myself a new pair of boots and a couple of tops.

It felt good to buy myself a few things for a change don't get to do it very often.

I told Jessica this afternoon that I think she should see about getting a cot for Leo as he does not like sleeping in the toddler bed. I think it is because he can't move around and when he tries he wakes up and gets out of bed and goes looking for his mum. She had a cot for him when he was littler but someone told her she should get a toddler bed and she did, no way she would listen to me. I wouldn't know what I am talking about.......lol

She said she may be able to get a cot for nothing so that would be good.

Speaking my mind isn't being cranky

I have been informed by my husband and daughters that I have become one cranky ass bitch well I disagree after giving it some thought I have come to the conclusion that the problem is that since starting this new medication I often speak my mind and do not let people walk over me or take advantage of me and they don't like that.

Natasha has just left here and not in the best mood as she was going on again about Tim going guarantor for her and Lucas so they can get another car and I told her it isn't going to happen well that set her off. Going on about how if it was one of her sisters it would be different and I lost it. Told her whats what and she started going one about how I have changed since being on this medication and I told her that as far as I am concerned she doesn't like the fact that I am asking hard questions and not just saying what she wants to hear to I can avoid conflict.

I kept asking her how she thought she was going to pay a loan she would say we have figured it out and I said tell me show me put it in writing so I can see where the money is going to come from to make the repayments and she just kept side stepping the question.

Now I first pissed her off when she walked in the door as she went to the fridge and took out a can of Coke and I said ask first the answer will be yes but ask first. I asked her how she would like it if people walked into her house and just helped themselves to things, she knew I was right she just didn't want to admit it.....I'm 46 and I still ask my mother if I can have a can of drink or chocolate as I think it is just polite.
at May 27, 2009 12 comments:

My Defination of Love

Is not killing them when they are driving you around the bloody bend, yes Tim is driving me mad again. Last night I was eating something and really felt like I would need a drink to wash it down, I tried to ask but was chewing and didn't come out well so I made a drinking sign to Tim who said "what". I swallowed then said I needed a drink and what does he say......"Was that so hard why did you have to wave your hand around I have no idea what that means"

At that point I got mad and told him every man and his dog knew what it meant and he was just being difficult. He wanted to know why I was in such a bad mood bloody men.........

Another definition is putting up with a cranky short tempered cow..........yep that has been me the last couple of weeks getting cranky over the silliest things and then thinking to myself "why"

On Saturday afternoon Tim and Jessica had another huge fight she called him an A hole and he called her a bitch there was a lot of swearing and carrying on. It all happened while I was laying down so I kept out of it.

When I did get up land come out Tim started to yell at me and I went for a walk as I didn't want to get involved later when I explained to him that my counselor suggested that I not get involve he was more understanding.

He said he was heart broken because of the way she acted and I knew that but I couldn't do anything about it. I have been through it with Kathy-Lee who has told me she hated me and that I was a bad mother so I know how he feels.

Tonight they managed to make up and both said sorry thankfully I didn't like the tension in the house.
at May 18, 2009 3 comments:

On Mother’s Day my brother and his wife gave mum a small wondersuit and a dummy it took her a few seconds to realize why that was. Yes my sister in-law Leigh is having a baby she is due on New Years Day.

Mum told me today that David wants to know the sex of the baby but Leigh doesn’t and as Leigh said she can’t say ok tell Dave and not me as Dave would not be able to keep it to himself, so don’t know what is going to happen with that.

Now on Monday night I got a phone call from my sister Sandra and she called me aunty Jo and I said what I’m not your aunty Jo and she laughed and said but you will be my babies aunty Jo. Then the penny dropped she also is having a baby and she is due sometime in January, at this time she isn’t sure exactly when.

So in the new year we will have two more members in the family, I am so excited about that as I know it is what they all want.

Sandra was a little worried she wouldn’t be able to have a baby and I think it is great that she is going to be a mummy.
at May 13, 2009 6 comments: 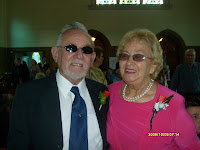 Well Chemo is back on the cards as one of the lump nodes taken when they removed his lung came back malignant he will also be having radio therapy. First he has to fully recover this includes eating better.

When I saw him this morning I thought he looked drawn in the face and I could tell he had lost a bit of weight and this is a worry. Mum bought him an English muffin and he couldn't even manage to eat all of one half of it.

When mum told my sisters about him needing chemo they both got very upset and cried I however, didn't cry yes I was upset and yes I do worry about him but I am thinking positive.
at May 08, 2009 6 comments: 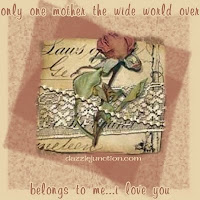 I do get annoyed at times as I feel they are not kids anymore and I don't have much money either but I always manage to get gifts for my family when needed, so I don't get why they can't. I have tried not getting them something to give mum or dad but when I did that they just didn't bother with a gift which upset dad a lot more then it did mum.

I even had to buy something for Natasha to give me but at least the other two have managed to get me something on their own not sure if Tim has bought me anything yet.
at May 02, 2009 3 comments: