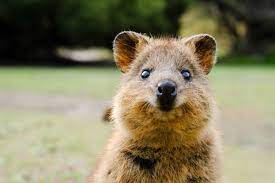 They can be found in the south-western part of Western Australia in particular on Rottnest Island. There they win over the hearts of many visitors with their relaxed and friendly nature.

They are also known as the short-tailed scrub wallaby, is a small macropod about the size of a domestic cat.

While our quokkas are certainly friendly, touching and petting them is not permitted. Quokkas and birds on Rottnest Island have been known to deliver a nasty bite as well as carry diseases like Salmonella.

In 1943 American bakers were ordered to stop selling sliced bread for the duration of World War 11, only whole loaves were allowed. The reason for this was never explained, how it helped the war effort no one knows.

In the Stone Age people who didn't feel well someone would cut a hole in the persons body with a sharp stone to allow the pain to escape.....Really how does anyone know that.

The ancient Romans had shows called Pantomimes hundreds of years ago, a man would read out a story while silent actors played the

A Flemish artist is responsible for the worlds smallest paintings in history, including a picture of a miller and his mill painted on a grain of corn.

Had a good night, I woke Tim to help me this morning, he said he went to bed at 1.30am, I thought ok but I still need help.

Kathy came and showered my at Jess's place.

Tim at last cleaned up out the back where I used to sit during the day as it was a right mess and I haven't been able to sit out there since June due to the damage from the tree coming down.

Had a good night up at 5.40am and had Tim help me dress, as I had to unpack the dishwasher before she came down as she would only go off that her didn't do it.

Workmen turn up to work on the bathroom including the painter, at 2.30pm the plumber turned up to install toilet, sink and shower. It will be ready for use tomorrow.

Used the new toilet this morning there was water in front of the bowl so I placed a towel in front of it.

The guy in charge of the bathroom reno came and picked up all the rubbish and said someone should be here tomorrow to do the curtain rods.

Late this arvo the people came to remove the porta loo and shower.

Received part of my Kmart order a big box for two small packets of colouring pencils. Talk about a waste.

Another day to struggle through and it is suppose to rain today.

Sandy rang at 10ish to say she was coming to take me to the cemetery as Mum & Dad's headstone as it now has two extra photos on it. One of Mum and one of Mum & Dad on their wedding day.

Tim sent me a message saying he was 3hrs early for work, he read the shift info wrong. He didn't bother to come home though.

The bathroom guy came and installed the shower curtain.

Woke to the sound of rain at 4.30am, got up and went to the loo then to the kitchen to check the roof it was leaking so placed bowl to catch the water and turned the full dishwasher on.

A public holiday to mourn the Queen, also my 38th wedding anniversary.

We had planned to go out for lunch but it was raining too much so cancelled. Had KFC instead.

Last day of term 3 for schools and still wet.

Jess came and got me changed for bed, I rang Tasha to come help me into bed and she was in a foul mood made me think I should have asked Leo.

Had a good night and I am in less pain this morning.

Tim picked up the shower chair from Sandy's, so Kathy can give me a shower.

Kathy arrived at 1.30 and showered me and it was good. 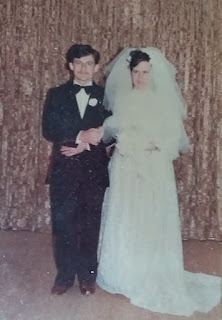 What is a Dystonic Tremor?

Tremor is an uncontrollable/involuntary oscillation or shaking or rapid movement of a part of a person’s body. For example, if a person has head tremor, then there will be involuntary shaking movement of the head. Similarly, if a person has hand tremor, then there is uncontrollable shaking of the hands. Tremor can affect any part of the body including eyes, vocal cords, arms, face, trunk and legs.

Dystonic tremor is a type of tremor which the patient develops along with or in association with dystonia.Dystonia is a neurological disorder where there is transmission of incorrect messages from the brain to the body resulting in unwanted movement or over-active or abnormal postures. Patient experiences Dystonic Tremor commonly in young adulthood or mid-life.