I am not a hoarder, I do not care what my children say they are wrong keeping things of sentimental value is not hoarding.

I cam home today to find my kids and hubby having a clean out and they had thrown out some things I wanted to keep and when I went through the stuff they had chucked and picked out a few things I didn't want to get rid of.

Right now hubby is going on and on about stuffed toys we have he wants to chuck them out and I said no they are not his and his daughters still want to keep them and I don't care what he says he is not throwing them out.

No matter how much stuff I agree to get rid of we have a clean out 2 or 3 times a year it is never good enough. I am so over hearing them say I am a hoarder. When Kathy watched the show Hoarders she had to admit I am not one but that didn't last as she has gone back to saying it again. 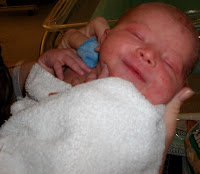 On the 22nd my first granddaughter was born at 7.41pm weighing 6lb 5oz's and she is such a cutie.

The only one with Kathy for the birth was bubs dad Chad, I was there earlier but at 6pm Kathy told me to go home as it would be hours before bub would be born and that they would ring me when it was getting closer and I could go back. Well so much for being hours as it was only 1hr and 41min later that Cookie was born.

She has been named Sydney-May Joanne and after much discussion between Kathy and Chad it has been decided to give her Chad's last name.

She looks so much like my niece Temika they really do look like twins.
at February 17, 2010 5 comments: