Update on my dad 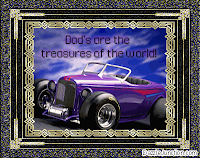 Just an update about my dad he had an operation today to remove some of the lump glands in his stomach area as the doctor thought they looked suss on the scan he had done.

If the cancer has spread to there then they will not be able to remove his lung and he will just have to have chemotherapy and radio therapy.

Hope it is not long before he gets the results from this opp back as he feels like it is all drawing out so long, and he doesn't want his kids to know how worried he is yeah like we can't tell and we aren't worried ourself.
at March 31, 2009 7 comments:

My darling husband has been speaking to our GP about his drinking and has been referred to a drug and alcohol centre at the Mater hospital. This is great news I am so happy with him for doing this I just hope he goes and it helps him.

I told him the other day that I do not like the way he treats Jessica she went up to him to show him something she bought and he was very nasty to her and she said "if thats how you feel I will never speak to you again" and what was his response "I should be so lucky". When I told him this is what he said to her he couldn't remember in fact he couldn't remember anything that happened that night and that has become a habit with him.

He told Jessica last night he loves her and worrys about her and is sorry about the way he has been acting and that when he was talking to the doctor about his drinking he was thinking about her and how bad their relationship is.

Two Down One To Go Yesterday morning Natasha had a phone call from the Dept of Housing the woman wanted to ask her a few questions, Tasha said can you ring me back I am on the toilet.......lol

Anyway when the woman rang back she asked Tasha if she still wanted a Dept of Housing place and when she said you she was told that they had a place for her. This she feels is great news except for the fact it is in a suburb that she would rather not live in but still she is taking the place, as Lucas said to her you don't know you may like it there.

So she should be moving out in a couple of weeks she has to wait until the place has had the carpet replaced and any other repairs done.

So now there is only Jessica and Leo to get out again then it will be just me and Tim here.
at March 25, 2009 6 comments:

After nagging my hubby for over a week he has finally set up the bed in the boys bedroom, my brother was giving away an old bed he had at his house and I thought it would be good to have for the boys to sleep in.

So last night Rhyder got so see in a bed instead of on the floor or in with Tasha & Lucas. Now to see how Blain goes sleeping in it as he prefers to sleep with his nanny and papa. I am hoping he will like having his own bed; it is a double bed so I hope he will be happy having a double bed.

Speaking of Rhyder his mother told Lucas this morning she is thinking about moving to the Gold Coast this of course has upset Lucas at the thought of not being able to see his son as often as he does.
at March 22, 2009 3 comments:

Worn Out and Frustrated 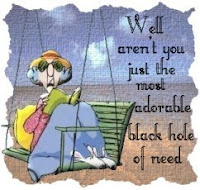 I am so worn out with looking after Leo who is sick and putting up with Tim who drives the patience of a saint between him and Jessica it is a wonder I haven't gone insane yet.

Dad is still waiting to have his pet scan went over to have it done only to be told the machine was broken so now it will be Friday before it is done.

Tim has been spending every day looking for work well the days he isn't working which is both good and annoying I have asked him to do a few things around the house as well as mow the lawn and clean up the back the yard.
at March 18, 2009 6 comments:

The Runs and Tim

I have been sick since Saturday night it came on while I was watching The Bill, I suddenly had to run to the toilet and yesterday I felt sicker then I have in a long time, thankfully I was able to spend all day yesterday in bed and no one disturbed me,

I am feeling a bit better today at least I am no longer running to the toilet all the time. Although I am feeling worn out and I will be going back to bed shortly.

Tim has been away working this weekend and returned home at around 3am this morning at 5am I was woken up by Leo crying and Tim and Jessica fighting. This fighting just got worse as time went on Jessica was yelling and swearing but I could tell that she was doing it mostly to piss off her father. Yes he had been drinking he told me he had 2 large glasses of wine which is equal to 4 glasses anyway I asked him to just let it go but he wouldn’t and in the end Jessica to Leo and said she was going for a drive. After she left I asked him was he happy now that he drove his daughter and grandson out of the house yet again he told me to shut my F#*ing mouth at which point I walked into my room got dressed and told him I was going for a walk he made some smart ass remark then said he was going to sleep in his van.

So he is now sleeping in his van and Jessica is home asleep in her bed and Leo is back in his cot. I think I will now go back to bed myself.
at March 16, 2009 4 comments: 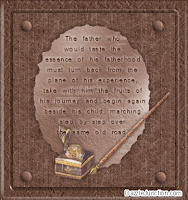 Sunday night my mother had to take dad over to the hospital well it was really Monday morning as it was at 4am, He had bad stomach pains and really felt sick anyway they couldn’t find anything wrong with him but thought he might have a spilt at the top of the stomach so they sent him for a chest X Ray.

Well the X Ray showed a shadow on his lung the size of a saucer and it wasn’t there 5 years ago when he had his last chest X Ray, He has had a number of tests and we are still waiting on the results of some of them he has to have a PET SCAN but of course the machine to do the scan at the John Hunter is broken and he will have to go somewhere else to have it done so he has to wait till the 16th to have it done.

Found out this morning that dad does have lung cancer when mum told me this I had a good cry, he will have to have chemo but at this stage we still don’t how much of his lung with have to be removed.
at March 11, 2009 8 comments:

I will now give you an example of that saying my oldest daughter Kathy-Lee discovered last night that she was missing $1600 from her money box. There was no sign of a break in and the only other person who has been there is a so called friend of Kathy’s.

You can imagine how distraught she was when she realised she rang me in tears I handed the phone to Tim who spoke to her for a bit then when he hung up he rang the police they said a office would be out there straight away so he got Jessica to drive him to Kathy’s. The police arrived a few minutes after he did and took a statement had a look around agreed there was no sign of a break in and then took her friends name and phone number and said he would be speaking to her today.

This morning the finger print guy turned up and looked at the money box but said that he could only find a few smudged prints.

I will let everyone know what happens if anything.
at March 10, 2009 5 comments: 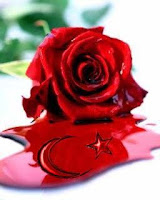 Well my darling hubby is at work again tonight doing another concert I think and he is working on Monday night also doing rail. He has been busy all week looking for work handing in resumes and even went for an interview on Friday.

So this first week of having him home has been ok he hasn't managed to drive me crazy yet.

He said he may get a bit more work for a company in Sydney and asked me if I would be ok with that and I said yes of course I would be as long as he is happy and when he is working he is happy.
at March 07, 2009 4 comments:

Tomorrow I have to go and see my counsellor again so I hope the Dr has faxed over the referral. I have been thinking about getting Tim to come to a visit with me but I am just not sure part of me would like him to another part doesn't...........I guess I will go with the when in doubt don't rule...........lol

Last night I had Leo for the night Jessica went out for the night and he was really good although I only had 3 hours sleep before he woke up and stayed up for 2 hours but unlike his mother I didn't get upset with him at all.

This morning she sent me a text asking if I would take him to Sunday lunch and I said NO but she text back pleaseeeeeeeee and again I said NO but then she said she didn't know when she would be home so I ended up taking him. However when Lucas wanted their car I asked if Jes was home and she was so I told him she could drive him over to get the car and take Leo home with her......she wasn't happy about it but I didn't care.

Lunch was good only me and Sandra their with mum and dad although Sue turned up just for a visit and after lunch Sandra drove me home.
at March 01, 2009 5 comments: