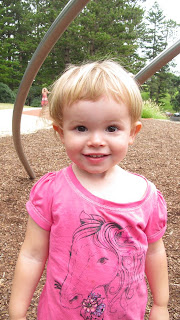 Today for a change I am watching my precious granddaughter Sydney-May while her mum is at work because she has been sick and today has a runny nose and slight cough so Kathy-Lee didn’t want to send her to day care. I would have loved to have taken her to see nan but forgot to ring mum and tell her I had Sydney and of course mum had Temika so I wasn’t able to take Sydney, I left her here with papa who rang me when I was nearly home wanting to know where I was as he had to get ready for work. I felt he could easily go and have a shower with her here but anyway I was only a couple of minutes away so he had his shower when I got home. I could tell when I got home that papa had been playing with her while I was out.

Anyway moving on we have had some lovely warm days although I think the nights are still pretty cool and even though it was warm outside it is still cool in the house and I am still wearing light weight long pants. 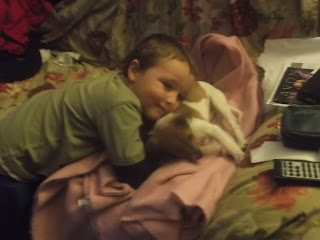 Last night for the first time since Leo has been wearing only undies to bed he wet the bed and of course he was in our bed I noticed he had wet and got up and got him a pull up and clean pj’s and changed him and got a towel and placed it over the wet spot in the bed. Leo didn’t wake at all while I was changing him. However, when he woke up this morning he says to me why am I laying on a towel I tell him he had an accident during the night, later while he was sitting watching Tom & Jerry he looks down and says nanna why am I wearing these pants I had red ones on when I went to bed…………lol I remind him he had an accident and he slaps his head and goes oh yeah now I remember………he looked so cute………………..

I have managed to go and peg the washing on the line without worrying about Sydney but Tim couldn’t have a shower.

It's never a dull moment with kids, right? Sydney is precious and Leo sounds like he has quite the personality already~

Talk about having your hands full! I bet it's fun to have a little girl around the house once in a while, though. :)

Never dull indeed and yes Sydney is just so precious like her mother, I just managed to get her to go down for a nap..........Oh yeah Leo does have quite the personality.......

Yes it is different having Sydney here she is not so full on and running around like a crazy person......
which Leo does..........lol

Dearest Jo-Anne,
Wow, you have handful of things to take care and managing very well, my friend☆☆☆ Your Sydney is really lovely♡♡♡ I loved the picture of Leo hugging your dog and sure looks growing fast. Sorry for your extra work though;
Lots of love and hugs from sis-city in Japan, xoxo Miyako*

Wow. You DO have your hands full. You know how it goes... Kids are a a lot of work. Blessing too, but still a lot of hard work. :-)

oh my gosh..i am just getting to the stage when my own kids are no longer doing these things.......but I have a grandchild on the way..i will be starting all over!

Thank you Sydney is such a doll and the extra work is just part of life.....

Yes that is just the way it is no sooner then our kids are no longer doing these things then we have grandkids to do them.......