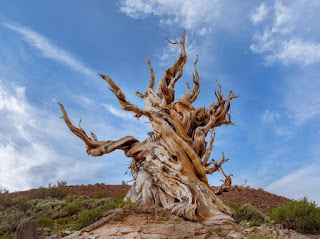 Good morning or afternoon everyone, here we are at another Tuesday meaning it is plant day and today's plant is the Methuselah and not the one from the bible who died at the ripe old age of 969.

This Methuselah is even older it is the nickname given to a very rare and special tree that grew from a 2000 year old seed, yes it grew from a single seed after a 2000 year wait. Well that's what the book says.

In the 1960's in Israel some archaeologists excavated a ruined palace dating from 2000 years ago, inside they discovered an old storeroom which held a jar containing ancient dried out date palm seeds. When the seeds were planted one of them managed to sprout.

Date palms were very important to ancient people who used them as both food and medicine their seeds stored to protect them from enemies.

This type of tree, the Judean date palm didn't even exist when the seeds were discovered it was extinct. Now thanks to the seeds it's alive and growing again. The tree is male ( date trees are either female or male) so it can't bear its own fruit, but scientists are hoping to use it to pollinate another species of date palm to see what happens.

That is ever so interesting Jo-Anne.
Never had any idea of such an old tree.

That is so interesting and really cool!

That Methuselah tree is so cool looking. And I love the story about the found seeds that brought back an extinct tree.