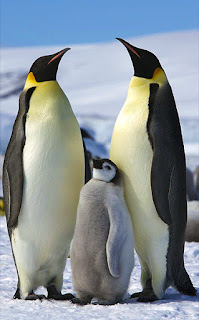 Tuesday is creature day and today's creature is the Emperor Penguin, it is the tallest and heaviest of all living penguin species and is endemic to Antarctica. The male and female are similar in plumage and size, reaching 122 cm in height and weighing from 22 to 45 kg.

Some emperor penguins are the only birds that never set foot on land.

It is difficult enough survive in Antarctica, let alone breed, the female lays the egg in the mating are, after the chick hatches she leaves it with the male and goes in search of food which she stores in her stomach and coughs up to feed the chick.

To avoid freezing they have a thick layer of fatty blubber under their skin and a blubbery, feathery brood pouch just above their feet, where the egg or chick can shelter. The parents need to take care not to drop the egg onto the ice or it will quickly freeze.

Fascinating that God has put these birds where only they could survive and given them everything they need to do it.

Not the best ambiance for some sexytime.

I've seen documentaries about these birds and they are quite amazing! :)

They are beautiful, and interesting creatures.
R

Such amazing birds, I used to love watching them interact with each other at the zoo.

Penguins are amazing creatures and they are created to live in the freezing cold part of the earth. Really interesting.

Try not to hope to get rich medium-term in land venture. Despite what might be expected, it might take as long as 10 years for your speculations to truly pay off and numerous new to the business neglect to understand this.AAP KI NEWS
AAPKINEWS

I just realised today is Monday and such fact day so here are some facts. During the great plague of Europe the Pope at the time made it ...