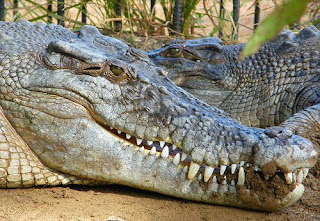 Well here we are at another Wednesday, and it's another stinking hot day at that. Being Wednesday means it is creature day and today's creature is the saltwater crocodile.

The saltwater crocodile is the world's largest reptiles with some growing up to 7 metres or 23ft long, we usually call them “salties”.

Like other crocs, salties are covered in hard bony plates called scutes. On their tails and backs the scutes form big spikes or knobs similar to the bony armour found on some dinosaurs.

Salties are merciless predators that can take on pretty much any prey they like. Powered by their huge tails they zoom through the water and leap out t o grab prey on the bank.

The eyes and nostrils are on top of their head, allowing it to remain mostly hidden beneath the surface of the water, yet and still able to see, hear, smell, and of course, breath.

Humans are not a regular part of a large crocodile’s diet but a person at the water’s edge washing dishes or having a drink looks very similar in a crocodile’s eyes to any other mammal and is thus treated as a potential food item. Crocodile attacks only take place because people disregard the dangers associated with our northern waterways, a little common sense will ensure such incidents do not occur. 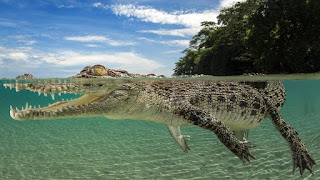 Interesting Jo-Anne. They are a massive size at times.

That is scary - my son when to the Okefenokee Swamp here in GA and just got back - they kayaked with the alligators. No way would I do it!

They are huge! Scary and sneaky. :)

Unfortunately, we only hear about them when there's abd news about them... they're either full or extinct...

I didn't know there even were saltwater crocks.

Chris.......Yes we hear a lot of bad things about them

I have a liking for alligators and crocodiles. I'm too afraid of them to want to be very near, but I like them. All the time I lived in Central Florida, they are about in your drainage ditches, sunning on your porch perhaps...one did have to watch out. We didn't have crocodiles of course.