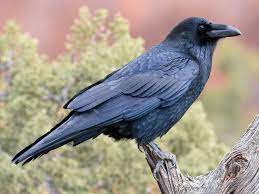 This weeks clever creature is the Raven a beautiful black bird they are one of the most intelligent creatures in the world. They belong to a family of birds called Corvids, who have been recorded doing very intelligent things.

There are three species of raven in Australia, and three crows. Ravens are generally bigger than crows, but other differences - e.g. range, calls - are more reliable for identifying which species is which.

A group of Ravnens is called a unkindness.

Didn't know Ravens were called an Unkindness for a group of them.

I didn't know they were called an "unkindness" either. How odd--and unfair, I rather think!

We have a lot of Ravens here. Maybe that’s why our subdivision is called Ravenswood! They are so smart - some mornings when my dog is in back, they actually play or taunt her. She runs, looking up and barks and they cackle at her. We’ve named them Heckle and Jeckle - It is so cute. They are territorial and know their people (and dogs)

Debby.......That is cool about your dog and the ravens