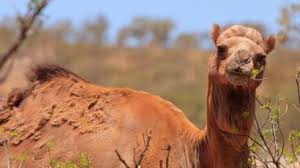 Well there are one hump or two hump camels which many would know both are native to the dry and desert areas of Asia and northern Africa. They live for around 40yrs and stand between 1.8 & 2metres tall, they weigh between 400-600 kgs. They can run 40 miles per hour.

What's in the hump? well it's not water like most people think it's full of fat and it's this that allows the camel to go without food for up to two weeks if needed.

They deal with hot,dry is a few ways they can heat up or cool down with no ill effects. They can lose up to a quarter of its body weight through dehydration, then when they get to drink they will slurp up between 95-150 litres at once. Such amount would kill most animals.

If caught in a sandstorm a camel will close their eyes and nostrils for protection also their thick, tough hair protects their skin from being blasted by sand. Their eyes have three eyelids and two rows of eyelashes that prevent sand to enter their eyes.

When they are provoked, they spit greenish substance from their stomach. Also they can use all four legs to kick their opponent in self defence.

Australia has the largest population of feral camels and the only herd of dromedary (one-humped) camels exhibiting wild behaviour in the world. In 2008, the number of feral camels was estimated to be more than one million, with the capability of doubling in number every 8 to 10 years.

I thought the hump held water. And they drink all those liters at once? What an interesting animal - loved this.

I had no idea Australia had wild camels!! Wow!

Interesting animal used in Australia to explore inland.
Imported into Australia from British India and Aghanistan....far too many camels now..

I’d like to have one of those wild camels here on the farm. Kicking with all four hooves would come in handy in a brawl.

He's a cutie! A gigantic cutie.

I don't think I want to get in an argument with a camel.

I'm one of those people who'd always thought the hump was how they stored water in the dessert.

"they" always told us camels stored water in their hump(s). So I too had that mistaken idea. Had no idea about the three rows of eye lashes! Makes sense, as they have a lot to deal with in their environs. Didn't;t know they could close their nostrils. I guess they sipped air in, so to speak during times of wind lessening. I had no idea in the world that they were in Australia!

Dear Jo-Anne, sorry to be away so long from visiting your blog. Last year slipped through my life and left me feeling somewhat devastated. And the first two months of this year I've spent mostly feeling sorry for myself. But today, I'm trying to once again take up the reins of my life and begin to do regular blogging--posting and visiting blogs.

I'm wondering how near you were to the fires in January in New South Wales. We don't hear much any more here in the States, but the fires were covered daily for quite some time earlier this year. I hope you and your family and loved ones are okay. I so hope, also, that no permanent damage has been done to the animal population. We heard here that more than a million animals died.

Hope all is well. And I'll be visiting regularly now--at least I hope I keep to my good intentions! Peace.

Hi all sorry for not getting back here but had internet problems and body issues. I am pleased everyone liked and learnt something about camels.

Dee and anyone else who is interested all the fires are out, there are no problems around my location. We didn't have any problem with fires, the country is still drought affected but we are doing ok

Discover a market you appreciate. It's simpler to deal with a few properties on the off chance that they are in a similar market segmet.AAP KI NEWS
AAPKINEWS