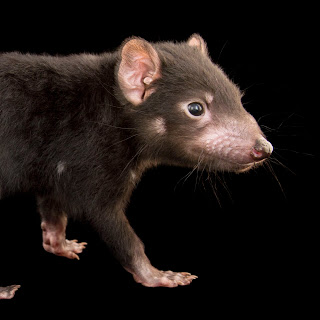 It's Wednesday or Aussie Day and today I am going to tell you a tad about the Tassie Devil..........

The Tasmanian devil is a carnivorous marsupial, it was once native to mainland Australia and is now found in the wild only on the island state of Tasmania, including tiny east-coast Maria Island where there is a conservation project with disease-free animals

It got it's name from early European settlers who upon hearing strange screams, coughs and growls decided to investigate they found a dog like animal with red ears, wide jaw and big sharp teeth that they called “The Devil”

Despite their name they are not dangerous, the do not attack people, although they will defend themselves if attacked or trapped. They may look fierce but they will much rather escape than fight. They do, however, have powerful jaws and when they do bite they can cause serious injury

They have a reputation as a fearsome animal, most of the time this is undeserved, except when it comes to mating season.

Between February and April, mating can be incredibly aggressive, with male and female devils prone to biting one another both during and after the act.

The maximum Tasmanian devil lifespan is about 8 years in the wild. However, very few devils will live that much longer as most die before 5 years of age. The average lifespan of Tasmanian is about 3 to 4 years. 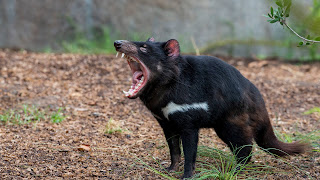 Tasmanian devil - so that is how it got it's name. He looks a little wild in that last photo. There is a cartoon with a Tasmanian devil.

I have heard of them but didn't know much about them. Looks like strong, big jaws for their size!

Very good Jo-Anne, lovely to read about our native animal on this Island.

Hi Jo-Anne - they are amazing little creatures ... fascinating to know about - cheers Hilary

I didn't know how they got their name, or that their reputation is mostly undeserved. Most wild animals are aggressive in certain circumstances, like mating, protecting their young, etc. These critters have always looked very fierce and scary to me, in nature documentaries that I've seen.

BTW, steer clear of moose! They look placid, like they wouldn't do any harm, but moose are dangerous and you don't want to tangle with them!

At one point our zoo had a pair, but both passed. After missing them for a few years we got one a couple years back, I believe.

That MOUTH in the last picture! WOW! I don;t know any of these fact about the devis. So glad you wrote them. I wonder why they pass so quickly?

Interesting facts about the Tasmanian Devil. It does look fierce in the last photo.

They may not attack, but I wouldn't get close enough to test that, they look mighty mean.

Huh. I did not know it's not naturally aggressive. Interesting.

Rita......Yeah their jaws are stronger then I thought

Kea.....We now know more then we did, no moose around here

ake as much time as AAP KI NEWS
AAPKINEWSnecessary from the outset. It takes tolerance in the event that you need to put resources into land.