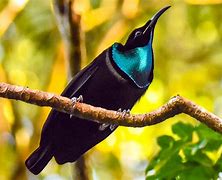 Hello everyone it is creature day and today's creature is the Magnificent Riflebird another creature I haven't heard it.

The male bird goes to very showy lengths to impress a female, plunging into a wonderful dance routine. Fanning his wings. He throws his head back and hops up and down, flicking its wings and swinging its head from side to side.

The magnificent riflebird is a species of passerine bird in the birds-of-paradise family.

Magnificent riflebirds are widely distributed throughout lowland rainforests of western New Guinea and the northern Cape York Peninsula of Australia. A relatively common species throughout its range.

The diet of the magnificent riflebird consists mainly of fruits and a variety of invertebrates such as spiders, millipedes, etc.

Certainly a bit more iridescent than we get here!

Such a beautiful blue.