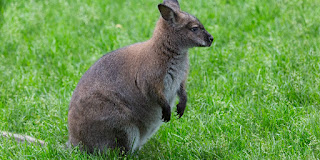 Hello world, here we are at Aussie Wednesday today's Aussie thing is the Wallaby.

A wallaby is a small or mid-sized macropod native to Australia and New Guinea, with introduced populations in New Zealand, UK and other countries. They belong to the same taxonomic family as kangaroos and sometimes the same genus, but kangaroos are specifically categorised into the six largest species of the family.

They are cute but aggressive animals within the mob can pose a danger to people, especially families with young children. Losing their fear for humans may also make kangaroos and wallabies more vulnerable to abuse by other people

I guess you are wondering what is the difference between a wallaby and a kangaroo.

They live for around 9 years They rest at midday in long grass or like this mum and joey on a soft mossy verge. That's why they're difficult to spot during the day if you go out wallaby searching. It's best to go at dawn and dusk when they're most active.

Although physically more like kangaroos, wallaroos' genetic make-up is closer to that of some wallabies and can cross-breed with some wallaby species.

They are herbivores and they mostly eat grass. They can also eat leaves and fruits, and other plants like ferns and herbs. When grazing, wallabies will often congregate in small groups, though most species are typically solita 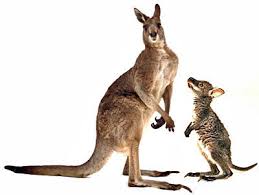 Once upon a very drunk night, I saw a kangaroo cross the road in front of my friend's truck. I said, "I know I'm just drunk, but I thought I saw a kangaroo," figuring he'd laugh it off. His eyes got as big as saucers and he said, very quietly, "I didn't wanna say anything..." No, they aren't native to Indiana, but I still defy anyone to tell me what else it could have been...

They look cute and cuddly, but I realise that yes, they're cute...but not cuddly! LOL. I wasn't sure of the difference between them and kangaroos, so thanks!

I just assumed they were a kind of kangaroo, didn't realize how different they are.

Chris.....You seeing a roo would be a shock and hard to be believe

In case you're going to need to do some home tasks on your property, at that point you have to ensure you comprehend what you're doing.AAP KI NEWS
AAPKINEWS