A Mammogram and more

What a morning been flat out since I woke up doing what you wonder well nothing exciting just went to help mum do her monthly food shopping she needs help as she ends up with two trolleys of stuff. I was so busy this morning I didn’t have breakfast before I left the house and didn’t have time to have it while out so by the time I got home I was feeling hungry.

I have always been one of those people who like to eat her main evening meal around 5.30-6pm this goes back to my childhood as mum use to make dinner around the same time so I carried it on. In fact when my girls were at school and I knew Tim would be working late I would often have their tea ready around 4pm that way they didn’t come home from school and fill up of junk food and I didn’t have to listen to them go on and on about being hungry. 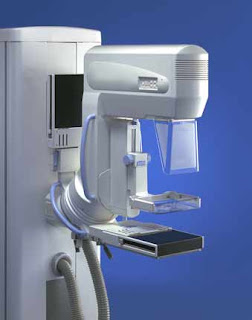 Yesterday afternoon I went and had my first mammogram it was about what I expected it to be not painful or not even that uncomfortable but it took a lot quicker than I thought it would.  I am not one who likes to have afternoon appointments if I can avoid it I much prefer to have a morning appointment, this also I get from mum she is the same. I know some people don’t care what time of the day their appointment is and there are even people who would prefer an afternoon appointment but not me. I don’t like going out in the afternoon if I don’t have to.

The high point of yesterday afternoon was that Jessica called in on her way home and had both my grandsons with her. The high point of the morning was when I went over to watch Summer while Kathy popped down to the shops, this I did after I returned from going to see my nan at the nursing home. 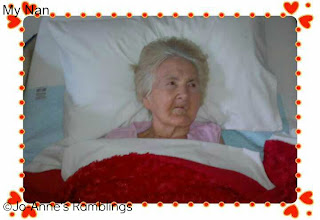 Speaking of nan she was good yesterday, bright eyed and answered when she was spoken to she even smiled a few times while we were talking to her. It is these little things that make us (me& mum) leave feeling good; I know many people may think that such little things are not signs of her being “good” but they are to use………….when she isn’t good she doesn’t answer and just stares off into space or she sleeps and doesn’t even notice us……………..but she wasn’t like that yesterday as I said she was good………

I didn't find the mammogram I had a couple of years back to be that awful although I was pretty worried at the time. All the waiting around is worse.

I would agree that your Nan had a good day. Any day that leaves you feeling happier is a good day

I can see that a day when your nan smiles is a good day. It's frustrating when elderly people you love don't show awareness...so when they do..it IS a good day.

I eat my supper around 6 as well. If I wait too much later than that I am starving.

I'm so glad you got to see your nan- she is beautiful. And good for you for getting the mammo over with.

I'm like you Jo-Anne, that I just don't go out in the afternoons. I've always made morning appointments. Like you, I also like to have my evening meal at around 6 p.m. Then I've got the evening to relax. Funny how we're all different, isn't it?! Lovely photo of your nan, and I very much agree that it WAS a good visit. Hoping that all will be well with your mammogram. I've never had one!! Take care.

Glad nan had a good day.
I hated the mammogram I had a few years back. I was told it wouldn't hurt, but I think it does for some and not for others.

Was lovely to read your nan was responsive. It does make a difference to all.

When my doctor tried to use that mamogram thingie to check for testicular cancer, I screamed at him to let me alone.
After I started to run away, he said, "I was just using that threat to get you consider that a prostate exam wouldn't be such a bad thing."
Had to admit, he was right.
Although I did feel violated. I'm NEVER going to prison.
Speaking of violated, I'm thinking "Anonymous" needs to put his head in that mammogram thingie.

Dear Jo-Anne, your paragraph about your nan reminded me of the line "My heart leaps up when I behold a rainbow in the sky." BEcause that's what happens with you and your mother when your nan has a good day and smiles and is more alert: your heart lifts up with joy. I'm so happy for you. Peace.

I think when you see how they take a mammogram it can make you think it is going to be a terrible experience when in fact it's not at all......

It is rare for me to feel starving and not because I eat often I can go all day without food and still not feel like I'm starving.......

Good to hear that I am not the only one who likes to eat early and have morning appointments over afternoon appointments....

I think it may hurt more if you have larger boobs I have only a small bust....

I get my results in about 3 weeks I hope the results show nothing......

I would rather a mammogram over a prostate exam don't want anyone sticking anything up my bum........thank you very much..........

I'm glad it didn't hurt. I would think it would.