Here we are at tough enough day and today's creature is the good ole Tassie Devil.

The Tasmanian Devil may be small but it has a big bite, the same strength as a dog four times its size. This is mainly due to its diet they eat lots of meat so they have to be able to crunch bones and tear off large chunks of flesh.

Tasmanian ‘devils’ are named for the sound they make. In fact, the first European settlers to enter Tasmania (the southern state where they are found) began hearing unearthly, blood-curdling shrieks and growls from deep within the bush, making them imagine that demons surrounded them in the wilderness. Hence: Tasmanian ‘devils’. They make lots of strange sounds (coughs, growls, snorts, sniffs, screeches and even sneezes) usually to scare off other animals to avoid fights.

Like all marsupials, devils store fat in their tails, which thicken up like humans' waistlines. A particularly plump tail is a sign of a healthy Tassie devil and, considering they can eat up to 40% of their bodyweight in one day, their tails can get mighty plump!

Tasmanian devils have a bit of a disturbing feeding habit. These mischievous little critters like to fall asleep inside a rotting carcass (called ‘carrion’) so they can wake up and continue eating. Though it sounds a little gruesome, by eating animal carcasses, Tassie devils actually help to keep areas hygienic and free from blowfly maggots.

A mother Tassie gives birth to around 20-40 joeys at once. However, these joeys have to race to her pouch, which only has four teats. Talk about a hard start to life! Because of their tiny birth size, the ones that make it will live in their mother’s pouch for roughly three months 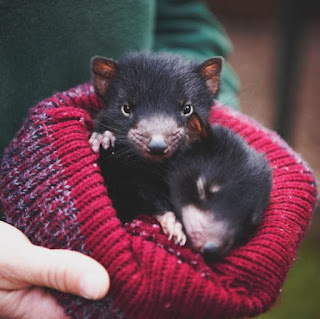 Fascinating creature Jo-Anne and they sure do make a weird noise.