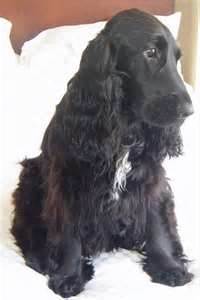 Just before Christmas my brother’s dog “Paris” got sick and it cost them a bloody lot in vet bills somewhere between $1000 and $2000 and I can tell you I would not be willing to pay that type of money. Now if you are prepared to pay out that type of money in vet care you should have pet insurance, which they didn’t have.

My next door neighbour spent over $1000 on vet care for her dog and it didn’t help he stilled died only weeks later and she said there was no way she would make the same mistake again and in fact when her last dog got sick she just had him put down instead.
at January 17, 2013

We don't have it. I worked as a veterinary technician for three years when I was in school and utilize that for the minor stuff. Thankfully, we have healthy animals.

I will spend anything if they will get better. But if they will not get better I will put them down. My two cats have been sick with a virus and I had to take both of them to the vet but didnt have to spend very much money on antibotics , I will do anything if possible but not when it is going to be fatal.

I don't have pet insurance either. I think every pet I have had, I make a decision on what needs to be done at the time. I had a little Shitz Tsu that I spent $1000s of dollars on to keep her comfortable after she got arthritis in her back hips. The meds were pricey but they seemed to keep her happy and pain free. I have a cat on some meds as well. I wouldn't spend money if I know my pet was in pain and suffering. My pets are like family to me.

I don't have a pet so I can't offer an opinion.

We don't have pet insurance. Granted, at the moment, we just have 1 cat. If we get other pets I might look into it more.

I don't have pet insurance. When our late dog Kesey had a stroke we took him to an emergency clinic late at night. They couldn't do anything for him. They called us to come in the morning to be with him while they euthanized him. Cost $1,000. They should have euthanized him immediately. When the collie love of my life, Faulkner, went downhill and had great difficulty walking, I took him to the vet and said, Get it over with. I wasn't thinking of the money as much as I was concerned about his suffering.

I spent thousands on three cats....after they died...along with my pocket book....I said "no more". Along comes the next kitty....I held her up and got in her face and said "no heroic measures, bread and water all your life"....well...Kitty is now 20 years old, goes outside (in our arctic) to poop, has all her teeth and hears every word I say. So much for vet bills. AND she LIKES bread and water.

I think for people willing to spend a lot on their pet (like my parents) pet insurance is a good idea. But if you know you have a limit (like us), it's not worth it.

I think it is a matter of what we can afford

Yes it can cost a lot and still the animal doesn't survive..........and sometimes people need to think more about the animal's suffering then their own needs

Yeah some will live long lives without being sick at all, all my dogs were healthy right up to the end more or less

Yes that is my thoughts you need to know your limit

Saved as a favorite, I really like your blog!