2013 is here now and I have had a great start to the new year, I wanted to write and post this yesterday but just didn’t get around to it, so here I am a day late saying welcome 2013. Anyway what was I doing yesterday that was so time consuming well I invited my daughters over for a baked lunch roast chicken with baked veggies, followed by apple pie and custard.

Out of my 3 daughters only 2 turned up Kathy-Lee & Jessica but all 3 grandchildren were here Jessica brought over Blain and Kelli & Daemon.  It was a great start to the year and I felt really happy with having them all here, Kelli is like another daughter even if she is my niece and that makes Daemon my great nephew.

It was another hot day here stinking bloody hot and had the air con going all day and half the night again and today it is a lot cooler. We had Leo here for the night and this morning he slept in late again it was like 9am before he woke up. 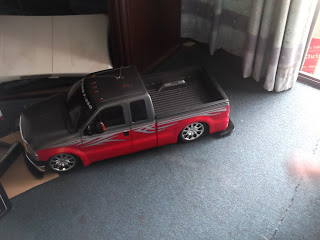 Yesterday afternoon Leo was so cute and so frustrating at the same time, my mum & Dawson gave him and Leo a remote control truck and he loves it. Tim/Papa took him out the front so he could play with it in the driveway, but the battery cover is lost so the battery keeps coming out and this frustrates Leo. Anyway he comes inside because the battery was lose again but papa was going to the toilet so I said I would help him and he gets annoyed and said “not you, you’re just a girl” this was both funny and not funny at the same time……….

Each time he got frustrated we just left him to get over it himself the first time he went and sat on a large rock that is just outside the house and the next few times he went into the bedroom and sat on the bed each time it took him only a few minutes to get over it and calm down. 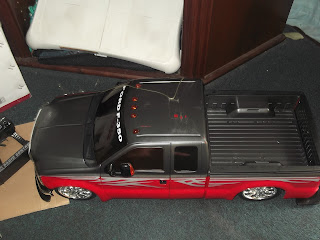 Then when it was time for him to have his bath he said he didn’t want on but he was so dirty his feet where black this meant we striped him off and carried him into the bath and just put him in the tub and papa washed his feet and splashed water over him.

Everything was fine till it was time to go to bed when I told him he had to have a pull up on (night time nappy) as he sometimes will still wet during the night he didn’t want it on but changed his mind when I said if he didn’t have one on he would have to sleep in his own bed and not with me and papa…………he likes to sleep with me and papa…………..lol When I got him dressed this morning he said to me “see I didn’t wee”…………….
at January 02, 2013

Glad you had a great visit.
I'd send you some of my cold air if I could. And maybe some snow to cool you off.

It is wonderful when family comes to visit. The baked chicken meal sounds good!

Kids can be both funny and frustrating at the same time. Our grandchildren are 2 and 5 and we see that combo from time to time.

Hope you have a great New Year, Jo-Anne. (I know I have already said that a time or two but I am still hoping that for all of us.)

All in all it sounds like you had a wonderful time. Kids are funny like that but we still love when do stuff like that, don't we? Wishing you a great new year and cooler weather too. :)))

Happy 2013. Your baked lunch sounds so good and having family over seems so nice.

Happy New Years to you and your dear ones!

Yes it is great to have the family here and great to see them leave too..........lol

Thank it has started off great hope the good stuff continues

Thank you my 2013 is off to a great start......lol Yeah our grandchildren are such a joy even when they are frustrating

Today has been a lot cooler but it will not last tomorrow looks like being another scortcher.....

Yeah it is great when the girls come for lunch and even better when they all go home...........lol

Thank you it has started off great