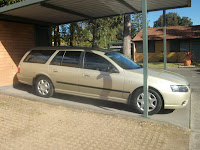 On Friday I got what I have been waiting years for this...............yep we have another car and one I can drive as well it only took hubby's van being written off in an accident for us to get something that I can drive. 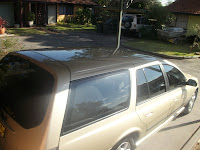 It is a 2006 Ford Falcon BF11XF Station Wagon actually it was built in December 2006 and it's a 4.0lt 6 cyl and runs on LPG. The colour is Gold and I am very happy with it although I have only driven it down to the shop and back.

Today hubby has taken it to work which I expected as he wants to show it off………………..

On Saturday when we were going out I asked to drive it but no he wanted to drive it and flat out refused to let me drive which really pissed me off, then he got all upset because I referred to it as my car instead of our car. I told him that he always said the next car we got would be my car more than his since he had his motorbike and his van but what does he say “I don’t have the van anymore” ok I know this but still I will be the one driving the car more than him and I am sorry Tim but I think of it as my car so deal…………

I had wanted a small car but agreed to get the station wagon, he has spent all yesterday afternoon stuff to it like adding fog lights to the front and he put something in the back a heater/cool container to use when I am shopping or when we go on trips to keep drinks cool……….. 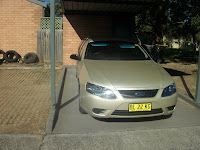 When you're married there should never be a yours and mine situation. It's both of yours isn't it? Sorry but hubby is sounding a bit selfish today! After all you do for your family I'd be letting you ride it till the cows come home!!

Yeah I do usually thing of our stuff as being ours not his or mine I was just haveing a moment when I told him it was suppose to be my car..........

I was feeling annoyed because he wanted to drive it and it wasn't till we where in the car on our way that he said I could drive home but since I didn't think I was going to drive I didn't take my keys or licence so said I would not drive without my licence on me...........

nice set of wheels. once the new wears off, he'll be wanting you to drive it around, right?

just like a man he has to hog the new toy. i hope you guys work it out and you get to enjoy driving it soon it the mean time enjoy being chauffeured around.hugs

Yeah I know it's only because it's new that he wants to hog it and it won't last long.

Yeah we have worked it out and it is only becuase it is new that we both feel like having a little tug of war over it but it really was all in fun...

This is wonderful news, Jo-anne! Hopefully your hubby will soon get over the shine of a new car and allow you to commandeer the driver's seat without any argument :) I wish you many thousands of contented, safe and carefree driving!

Great news about the new car Jo-Anne. I do hope that you sort out whose car it really is! LOL! Anyway, enjoy it - it looks really good and I love the colour.

Woweee1 its a beauty. Hopefully new toy syndrome will wear off soon and you can settle down to sharing the driving without a fuss.

nice wheels. i like the colour. drive safely and enjoy

Hello, your eastern new friend
Oh, this dispute won't happen to us. Because I don't have a license p:)
It is kind of understandable that man love to show off his new car. But sorry about your feeling. I hope you two could sort things out by now.
It won't fit in this situation. However, in Japan we have a word "chauvinistic husband". Japanee (or eastern) husband tend to have much more this kind of attitude toward his wife compared to wastern husband, I wonder.
Haha, my hubby is not. Lucky me☆

I understand wanting your "own" car - and marriage has nothing to do with. Just because you are married doesn't mean some things can't be yours and his - just because you have your own side of the bed, your own bathroom sink or a chair that belongs to you doesn't make you any less happily married, so I don't think everything has to be "ours". We do share everything, but we refer to things as "his" and "hers" for a reason.

In fact, in past generations, it has hurt the wife to not have some things of her own, cars included.

We now only have one car, but for the first 15 years of our marriage we had two and they were understood to be "Mom's" and "Dad's" - we happily shared them, but it allowed each of us to take the responsibility for one car and not have one person take on both when it came to maintenance, tags, inspections, etc. And we always knew who was driving what.

I do understand why you want this to be your car and it isn't selfish to think so.

As long as I have the car on Fridays and any other day that I need it then I am happy.

It is our car but I will still continue to call it my car......lol

Yeah we will share it without fighting and fussing........lol

I will drive safely I don't speed or do stupid things.......

Ther term "chauvinistic husband" would suit mine more often the not, that said he is also a loving and caring man. I am pleased yours isn't one.Yeah we have sorted out our the issue with the car it is ours but I will continue to call it mine.........lol

As far as I am concerned it is our car but I will still refer to it as mine and when I told hubby that he always said the next car would be mine and that it is in my name so it is mine he seemed alright with it he has his motorbike and I have the car, it's just the way it is....

Hubby knows he was acting selfish when the car was delivered and has now stopped that after we talked it out.....