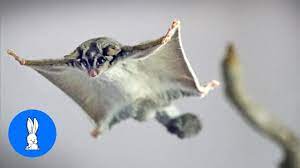 Have you head of the Sugar Glider well that is this weeks extreme creature.

It is an adorable little animal that lives in trees in forests across Australia. It has a very clever way of getting around from tree to tree instead of climbing it glides.

It has a special furry membrane, like a cloak which is attached to its wrists and ankles. When it wants to glide it launches itself from a tree branch, spreads its arms and legs out wide and floats through the air using its big tail to steer. It can glide up to 100 metres.

The sugar glider is a small, omnivorous, arboreal, and nocturnal gliding possum belonging to the marsupial infraclass. The common name refers to its predilection for sugary foods such as sap and nectar and its ability to glide through the air, much like a flying squirrel.

Yes, I have heard of them. Saw videos of them gliding through the night on a nature show once. So darn cute! :)

I have a friend whose late hubby used to raise them. They had dozens for a while...

I have seen these interesting Sugar Glider up close at a pets show. But I didn't know that it can glide like that. No wonder it is named Sugar Glider. Very interesting.

I would LOVE to see this dear creature!