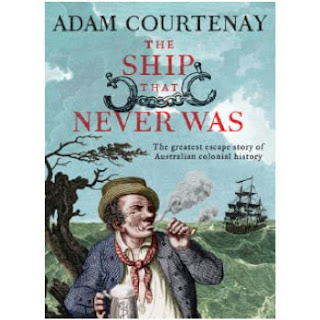 Well last night I started another book as I do every few days, this one is about a convict named James Porter. Who was born in 1805 and was convicted in 1823 for housebreaking and received a life sentence to Van Deimen's Land now called Tasmania. His gaol remote says he is of bad character and badly behaved.

What the hell did this joker do of note you ask, well in 1834 he along with nine other convicts hijacked the brig/ship The Frederick and used it to escape to Chile. Where they lived freely for two years, although four of them were later recaptured and returned to Australia. Luck was on their side as they escaped the noose through a legal technicality.

Four of the convicts were former sailors, and had been sent to Sarah Island (a prison colony within the larger prison colony of Van Diemen's Land) because of their history of previous failed escape attempts. Among them was Londoner James Porter, a former whaler who had previously lived in Chile and left a wife and child there, before returning to England and then being transported to Australia for the theft of silks.[2]

On January 14, 1834, ten of the convicts, led by Porter, seized the opportunity to escape by hijacking the Frederick. After overpowering their skeleton guard of jailers they left them on shore with provisions, cognisant of the fact that the ill-treatment of overpowered jailers during the Cyprus Mutiny had been a factor in the harsh punishment of those mutineers when they were subsequently captured.

The convicts then sailed across the South Pacific, arriving on 25th February near the mouth of the Bueno River in Chile. They scuttled the Frederick off-shore, travelled the remaining miles in the ship's tender, and passed themselves off in Valdivia as survivors of a shipwreck.

They arrived back in Hobart in March 1837 and were put on trial for piracy a hanging offence. This caused a considerable public spectacle in the settlement, and the court was packed for the trial.

James Porter and William Shires argued that as the Frederick had not yet been officially launched, it was impossible for them to have committed piracy.

The situation was further complicated by the Frederick having been taken in a harbour rather than on the high seas, a requisite for piracy.

Ultimately Porter and the others were found guilty of piracy, but not sentenced to death. Porter later alleged that the trial took only half an hour.

The convicts were imprisoned for two years in a Hobart jail, then transported to the notorious Norfolk Island penal colony, where Porter wrote his memoirs under the governorship of the prison reformer Alexander Maconochie.

His sentence on Norfolk Island was reduced after he rescued several officers when their boat capsized. He was later released from the harsh conditions of Norfolk Island and sent to Newcastle. In 1847 he again escaped, and this time was never heard from again.

The book is called A Ship That Never was by Adam Courtney.

I read this to my husband and he loved it. He kinda knew a little of the story.

I love these book reports!