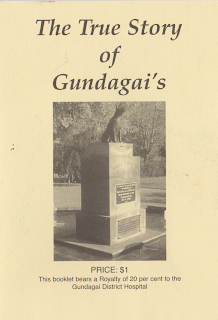 Here we are at another Dog on the Tuckerbox post, this week we will read about the decision to erect the monument.

The popularity of the poem and the publicity it gave Gundagai grew greater year after year. Prior to Gundagai's centenary celebrations O. A. Collins prevailed upon the organising committee (the hospital board), to adopt his suggestion that the climax of the celebrations be the unveiling of a Pioneers' Memorial which would be in the form of a dog on a tucker box.

Erected at the Five Mile, the known camping site of early teamsters. The adoption f this suggestion the late Mr Frank Rusconi who constructed the famous Marble Masterpiece, was commissioned to build the monument.

I expect there those for and against.

You have me longing to see the memorial.

There is always those who are for and those against.

This has been a cool series!