Good morning Tuesday, suppose to be a lovely Tuesday as well not as hot today with a temp of only 27°c much cooler then the last few days.

This morning on waking my first thought was “what a stupid dream” if only I could remember what was so stupid. 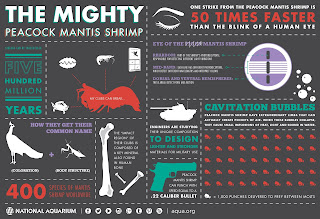 Anyway being Tuesday means it is Indestructible Creature day, today’s creature is the Peacock Mantis Shrimp, it's technical name is Odontodactylus scyllarus, now us Aussies say prawn not shrimp but anyway let's move on.

This little creature is a colourful creature and if you came across it while diving you might think “how pretty” but then it might whack you with its mindbogglingly fast punching fists, yeah you read that right, it punches.

It has two incredibly hard, tough, club like weapons which it keeps tucked up under its body, when it needs to smash through the shell of a snail, crab or clam to eat the soft body inside it flicks them forward with the force of a bullet.

What's most amazing is that the prawn can use its clubs thousands of times without damaging them, it leaves a trail of smashed up lobsters and seashells but its clubs stay strong and undamaged. Scientists have studied them and found that the clubs are made up of layers of minerals, some hard and some more flexible.

It ranges in size from 3 to 18cm in length, they are primarily green in colour with orange legs and leopard like spots. 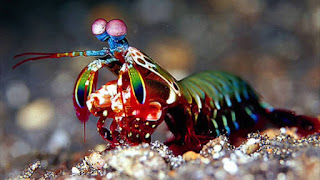 Well, I can see why they call them peacocks...But how are they scampied?

Hi Jo-Anne - what an amazing little fish ... aren't they a delight to see ... I've never heard of a peacock shrimp - but can see why - cheers Hilary

Far Side of Fifty said...

They are very pretty:)

They are VERY pretty! Whopping lobsters? Wow. Thugs of the crustacean world.

Stuffed if I know but they are pretty

Yes they are interesting

Such a pretty creatire

Wow! Love the colors of this puncher shrimp. ;)

This is an interesting read.

I think I would be so scared!