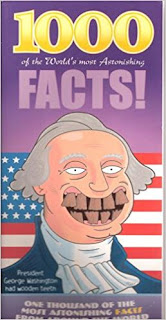 Hello Monday, no school today but I was still awake at 5.50am as per usual so I am up and writing a post, still in my nightie as I won't get my swimmers on till it is time to leave and go to my aqua class this morning.

Anyway being Monday means it is Did you know day, so here are this weeks useless facts.

The loudest sound ever recorded from an animal was produced by a Blue Whale, it is thought that whales can hear each other as far as a hundred miles apart.

If we add up all the time we spend blinking, we spend about half an hour a day or around five years of life with our eyes shut while awake.

Americans use enough toilet paper in one day to wrap around the world nine times, if it were on a giant roll they would be unrolling it at the rate of 7,600 miles per hour, roughly mach 10 or ten times the speed of sound.

A supernova is the most energetic single event know in the universe, material is exploded into space at a speed of about 10,000 kilometres per second.

Makes me wonder how they figure out some of their facts. ;)

I think we use that much toilet paper here - and no one can change a roll but me.

Yeah that's what I thought

I know, I have wondered that

I am the only one changes the roll here