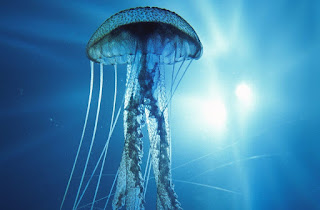 Good morning Tuesday, it is a lovely Tuesday here, not hot nor cold just nice, I had a sleep in till 7am because I could and because I have nothing to do today, I plan to stay of my feet as much as possible, so my ankle can heal a bit.

This mysterious jellyfish is a tiny blob no bigger than a fingernail and can do something incredible, instead of growing old it turns back time and grows young again as weird as that sounds.

Like other animals it reproduces normally and have larvae/ babies, which turn into a tree-like polyp on a seabed and the newborn jellyfish break off from it. However, when it gets old or ill, it can shrink itself into a blob, which turns into a new jellyfish tree and from that a new jellyfish is born. So one jellyfish can instead of dying keep turning back into a polyp and be reborn, now that is weird.

Scientists studying the jellyfish have seen them turn back into polyps again and again in their labs but out at sea there are a lot of predators that feed on the adult jellies, so it is unlikely that any one jellyfish really would live forever at some point it would be eaten. 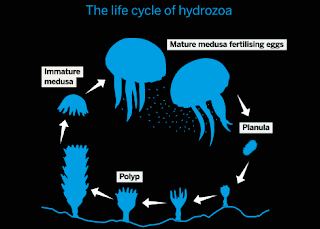 Hi Jo-Anne ... lucky you with that sleep in - I shall enjoy mine next week! Cheers Hilary

Interesting read Jo-Anne, one never knows where they are in the sea.

I think I'm becoming a blob...

Yes as sleep in is nice

I know they are hidden in the sea

Really, why would you think that

My doctor tells me so, lol!