Shoes and Socks and Pain to boot 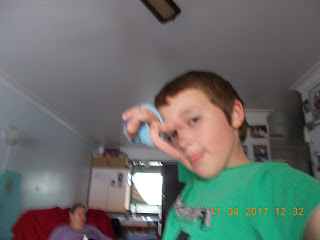 Hello everyone here we are at Thursday, another nice day, dry and warm in the sun but generally cold.

On Tuesday when I went to take Leo his school shoes one she the left one had the sole coming off so I though I cannot send him in this and went and tossed it in the bin the other shoe was anyway I came inside and thought what am I going to do, I rang and checked with his mum that she didn't have another pair of shoes,she didn't. So I didn't know what I was going to do but I then remembered that I had one shoe from the last pair I had kept as he always wears out one shoe faster than the other. I find the other shoe and thankfully it was a left shoe so I sent him to school in odd shoes. Did Leo care that he was wearing odd shoes, nope, he thought it was cool.

So I put on my joggers and took him to school and went to Lake Fair to buy him a new pair of shoes and of course Big W had none in his size so I then had to go to Kmart at Glendale and thankfully they had a pair of shoes suitable for school in his size. I got him the only pair of black shoes in a size 4 they had.

I have been trying to get him new shoes for over a month but they have not had any in his size, the school shoes have to be black, although on Tuesday I was at a point that I would have got any colour shoes in his size.

Now after I got home and took my joggers off the achilles tendon of my right leg again was really sore and I am having a lot of pain when walking and I told Tim that I am going to need a better pair of joggers all he said was that I should get inner soles for the shoes, I will but I am not expecting a lot. If he was in this amount of pain he would go and buy good shoes without thinking twice about it.

Last night he said I am only 54 and I am getting around with a cane and like an old woman but it is because of the pain in the ankle that is causing me to have so much trouble. Does he think I like having so much pain and not being able to move without pain.

Have to call you the sock lady :)
Better with a cane to help ease the pain Jo-Anne, doesn't matter what age you are as it's only a number.

At least with the cane I can get around pretty good

I never like shopping for shoes because those I like never seems to fit me. I hope getting a new pair of better shoes will ease the pain. Have a lovely day!

I don't even know what shoe size I wear. New shoes show up in my closet magically.

we both have the achilles tendon thing going on. Mine the Dr. said is a bursitis in the tendon. It burns..the feeling is like burning.

Ask Leo's mum to bring you half of the stockpile of socks Leo has at hone. My oldest boy was like that. He got socks and handkerchiefs when he came home to visit...went off with them and everything disappeared into a black hole...I had to keep buying.

Funny how kids can just roll with the punches when they're that age.

Dear Jo-Anne, so sorry you are having this foot pain. The thing about the feet and pain and walking is that your back can be affected negatively. I hope that isn't happening to you. I hope also that in the midst of socks and shoes and pain, you are taking some time to relax and simply be. Peace.

You can tell Tim that Janie Junebug says that just buying insoles probably won't help. You need really good shoes that support your feet. A doctor might be able to tell you what kind of shoes to get. I used to have a lot of problems with my feet. A doctor ordered prescription insoles for the proper shoes. So there, Tim.

I sometimes give myself that grief about the pains and the things breaking down in me at my age, which is one year north of you. But y'know what? We don't get an instruction manual of what to take care of and what to look out for when we are young- we get some warning signs and we almost all ignore them. Everything I love wants to kill me these days, and it's not a process I signed up for. Tim needs to get relegated to some sensitivity training.

Once more I'm reminded of the Northern/Southern Hemisphere thing. You're getting cold while I'm sitting here with shorts and the air conditioning on.
It's the way of things, right?

Leo is like Pete the Cat. Have you read those books? They are fantastic. There's one called, Pete The Cat- I love my white shoes. It's a great story- here it is on YouTube: https://www.youtube.com/watch?v=UwUlh3i4qto

Anyway, no matter what happens to his shoes, Pete just goes along singing his song. :)

The weather is hot and humid here. It's so humid today the heat index made it feel like it was 100 degrees. That's just ridiculous.

I'm sorry you're in so much pain. I know you don't need my permission but I say go and buy whatever shoes you need. No reason to continue to be in pain if a new pair of shoes will help.

The kids grow up so fast!!! I'm sorry to hear you are in so much pain. Foot pain is the worst because you can't get around very easily. I hope you feel better soon!

I wish they would show up in Leo's room magically

Yes it is and it is great when they can

Tim and the word sensitivity don't go together, I love him but he isn't sensitive to my feels most of the time, getting older sucks and having a body that is falling apart sucks

Yeah such is life and today it is bloody cold

If I had the money I would just go and buy them but have to ask Tim for money as I have no money of my own.