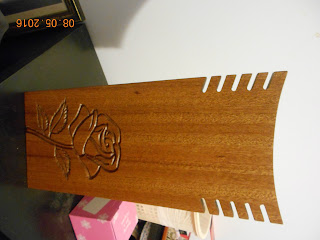 Well last Sunday was Mother's Day, so how was my Mother's Day, all in all it was a good day. I received some nice presents Jessica replaced the tray the boys broke and she also got me some pj's bottoms nice fleecy ones and a bath bomb which I will use on Friday night when I have a relaxing bath after a long day.

I also had the girls over for breakfast and Michael came as well, Kathy & Michael gave me this lovely necklace holder which Michael made himself for me and have to say I love it. Natasha gave me a new pair of jeans and a lovely top, however, the jeans don't fit and I will return them on the weekend and either get a larger size or some other pants. 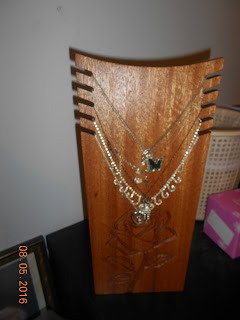 Then after breakfast Tim and I went over to my parents place for lunch, we had Henny Penny which is chicken for those who have no idea, kinda like KFC but nicer just saying. I also bought a bottle of wine to have with lunch and indeed had two glasses of wine, and on the way home I asked Tim if we could stop and get another bottle of wine which we did so in the end I had about a full bottle of wine with what I had with lunch and what I had at home after lunch.

Tim didn't give me anything for Mother's Day, mostly because I couldn't think of anything I wanted, so I asked him to give me some spending money when we go on the cruise and also said the bottle of wine would be a nice present for me.

Yes we are going on another cruise at the end of the month, we are going with my parents and we are so excited about it as is my mum not sure about dad though he wonders what he is going to do all day on a ship but I have told mum there are lots of things to do, including many live shows to see.

I did have a bit of a cry on Sunday because my arm was so stiff and sore as it is again today and yesterday I am just so over this arm the shaking the aching the stiffness the needing to message and rub the arm to ease the stiffness and aching feeling. I have times when I worry about becoming a burden to my family and yes they all told me I am not going to become a burden and I shouldn't be getting upset but at times I can't help it I just feel that way.

If it isn't my arm giving my pain and such it is my back which has been really bad recently I am due to go and have an epidural injection in my back tomorrow at L4-5 so we will see if that helps at all.

Happy Mother's Day to you, Jo-Anne. Indeed you are blessed with all the presents and the necklace holder is a great present. I hope you are feeling much better and ready for the cruise with your parents.

Sounds as if you had a good Mother's Day.
A cruise sounds good too.

It sure sounds like you had a great Mother's day. Good for you. Hope your week is good too.

Sounds like a wine epidural may be in order...

I have issues with my L3 and 4. Sorry about your aches and pains. A Cruise is the cure!

That necklace holder is awesome. I could use one just like it. Mine are all tangled. Sorry to hear about pain, hope it eases up soon.

What a nice Mother's Day. I love that necklace holder too. Have fun on your upcoming cruise. 😊

What a nice Mother's Day. Something handmade is special. Have fun on your cruise and I hope you get some pain relief before then so that you can really enjoy it.

Yes I am feeling ok today, and I know I am one blessed woman.

I did and I expect it will be a great cruise

Yes I did have a great Mother's Day,and the week is turning out ok

Yeah I so get that

So you can feel my pain,I hope the injection helps

Thank you we will