Hello world it is now Sunday for me and have to say the last two days seemed busy, ok Friday is always busy I know this but Saturday yeah it was busy as well. I went out to Wallsend for Jessica a drive of about 10-15 minutes to get something she wanted for Leo. Anyway I get to the shop and they are closed it was 9am and they didn't open to 10am would had been nice if she told me that in the first place. So I will have to go back there for her tomorrow as they are not open on Sunday.

This Sunday I am not having breakfast or lunch for the family, why you wonder, well I will tell you I really need to sort out the Christmas presents and yes I know I have been saying I would do them for the last week or so but I mean it today I will get it all sorted. I just hope once I have done that I do not discover that I have to get more stuff.

Speaking of Monday, ok not speaking of Monday but anyway a Monday thought came to me tomorrow Monday I will have to go and get Tim's Christmas present although not sure what the hell I am going to get him I was thinking of a battery pack starter thing, you know the thing one uses to start a car with a flat battery that is suppose to be better then using jump leads from another car. I am just not sure about it, I might get him a gift card from Supercheap instead, I will decide tomorrow.

We also have had a few stinking hot days again temps in the high 30's today it is suppose to be around 37°c and tomorrow it is suppose to be hotter still. Although have to say it was nice when I went for my walk this morning not hot at all, although I did leave home at around 6.20am.

Can you believe that Christmas is less then a week away, bloody hell, this year I don't think Jessica is coming here for Christmas Eve, she was going to but I think Leo said he would like it to be just him and mummy Christmas morning.

Kathy and Michael are going to Sydney with the girls Christmas Eve to see his parents and will be home here sometime in the afternoon of Christmas Day, she was concerned that me and her dad would have a problem with that but nope we don't, we get it there are times she needs to be with Michael and his family and this is one of those times. Michael's father isn't very well at the moment.

Blain is at his fathers this week he will be home again on either Thursday afternoon or Friday afternoon he went to his dads a day early as Kelli was in the area on Thursday and picked him up made more sense to do that then come back the next day just to get him, it is a 40 minute drive to his dads place. 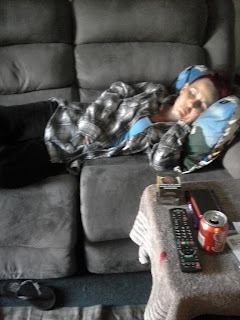 Most of yesterday afternoon Natasha was asleep on the lounge, Tim said she should had gone to bed but she preferred to lay on the lounge, it didn't bother me and if she was content to sleep there the so be it, might have been cooler for her as we had the air con going and the lounge room was not too hot, unlike her bedroom which with the door closed was like an oven.


Tim is working this afternoon and I am hoping the bus he is in is air conditioned you might think der of course it would be but you would be wrong there has been other days when it has been stinking bloody hot and he had been in a non air conditioned bus or a bus that the air conditioning isn't working in. Which really annoys the hell out of both of us with temps in the high 30's a body can suffer from heat stroke, but do the idiots in charge give a rats ass, nope.
at December 20, 2015

Busy your way--and HOT! It warmed up a tiny bit here today. From 4 degrees this morning to 17 degrees right now--brrr! (That's -15 to -8C)
Hope you have a wonderful Christmas and it cools off a little for you guys. :)

Been rather warm down here too Jo-Anne. Was 33 deg c today and 40 at one of the beaches..
Be nice walking early in the moring, too hot later in the day..

I remember your last summer Tim struggling to get a cool bus. Perhaps you should have called the company to give him a AC bus with a bow on it and call it his Christmas present!

BTW, it's not quite 37 degrees here, too- of course that's Fahrenheit here, though.

Christmas only a few days away. Good grief, the time. Sad how quickly it flies.

Another day, another scorcher, just saying, so hot that when I went shopping this morning there were people standing just inside the doors handing out bottles of water

This morning when I went for my walk at 6.30am it was already quite warm

Yeah each summer Tim has days when he likes to complain about not having a bus with air conditioning, which is funny because when I met him way back when didn't matter how hot it was the heat never bothered him, now he can't take the heat

Hell yes it will be here in a blink

This is great do you have a catologue if so I would love one to share with friends and family.
T20 world cup 2016 tickets book now
T20 World Cup 2016 Expected Start Date