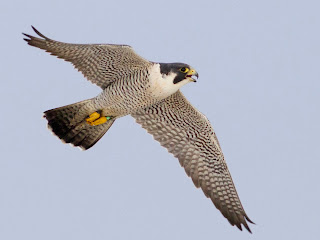 Well it's Tuesday and that means extreme creature day and this week have the Peregrine Falcon, the fastest animal in the world.

It coasts high above the ground until it spots something it wants it then folds its wings flat against its body and drops into a dive reaching speeds of more than 300 km/h. Wham within seconds this powerful bird has plucked up its prey with its large strong talons.

They have a special pair of eyelids that helps protect its eyes and vision as it dives through the air. They have a wingspan of 70-120cm's.

The Peregrine Falcon is found in most habitats, from rainforests to the arid zone, and at most altitudes, from the coast to alpine areas. It requires abundant prey and secure nest sites, and prefers coastal and inland cliffs or open woodlands near water, and may even be found nesting on high city buildings.

Peregrine falcons are solitary, territorial, top predators. ... Non-migratory peregrines, such as those in Pittsburgh, stay on territory alone or as a mated pair. No other peregrines are allowed in the territory, not even their own offspring. Peregrines have no long-lasting “love” for their young.

Sad to think it's been two years and the virus is still here and mutating. I didn't know that about the falcon. I thought a cheetah or something like it was fastest.

Yes, today marks the 2nd anniversary of the first presumed COVID case here in Canada. None of us ever could have imagined where we'd be two years on and counting.

Yes, I remember after the Lunar New Year celebration, we were placed under lockdown. It was scary with so many reported cases and deaths. This Peregrine Falcon is beautiful and an amazing bird.

Wow! That is a super fast dive!
Been a long two years and we are looking at three now.

I used to love watching them on TV as a kid...

There are few sights more awe-inspiring than to see a Peregrine Falcon at full speed. Once they set their sights on prey it stand little chance.