In 1838 the first religious women came to Australia they were the Irish Sisters of Charity they volunteered to go to Sydney to work with convict women teaching them to read and the Sisters of Charity began in Ireland by Mary Aikenhead. In 1838 at the request of Bishop Polding, Mary came to Australia with 5 volunteers they left Ireland in August 1838 and after a four month journey they arrived in Sydney on the last day of 1838.

Starting in January 1839 the sisters lived at Parramatta and visited the Female Factory where
many women convicts lived and worked for the government. The Sisters' main concern was religious instruction and care of the sick and poor, the Sisters' walked everywhere going to government hospitals, orphanages, schools and gaols.

The religious profession of Sister Xavier Williams, on the 9th April 1839 at Parramatta was a “first” and made a great sensation among Catholics and others with other young women asking to join the Sisters.

The Sisters distinctive dress made them conspicuous and they drew on them at times of hostility or bigotry, the good they did brought them a lot of support but of course life in those days was hard. 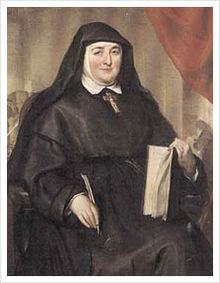 In 1847 the Sisters were asked to go to Tasmania, three of the Sisters went to Tasmania while the others stayed in Parramatta where they had the new responsibility of assisting women who wanted to live better lives.

Over time good friends helped raise money to buy a convent where the Sisters could establish a hospital and school, as well as a permanent home for themselves. General Catholic problems hampered further growth but the Sisters' hospital and school flourished, while they continued visiting the sick, poor and prisoners.

After some years, there were Sisters of Charity who had been born in Australia. When the government stopped paying teachers in our schools, the bishops encouraged vocations and brought new religious institutes to Australia to teach. Cardinal Moran encouraged our Sisters to begin more schools. New hospitals were opened.
The Sisters’ business dealings in the early days were often conducted by Father Angelo Ambrosoli, who helped choose places for their convents and designs for their chapels. 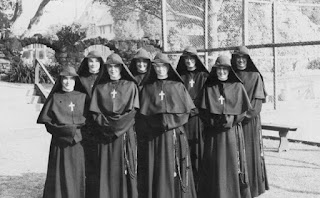 Two Sisters of Charity who helped them to flourish were M. Francis McGuigan and M. Gertrude Davis, both born in Australia. They went to Ireland to renew links with the Irish Sisters of Charity and joined the Sisters in Tasmania with those in Sydney.
Since World War II Australia has become more multicultural, with new needs arising as different ethnic groups arrive. Sisters of Charity have led the way in many fields, establishing ministries that others can now continue.

Once works are established, the Sisters have looked to respond to new needs. There are always people needing help, consolation, encouragement, and inspiration.
Australia has changed since our first Sisters arrived in 1838. The kind of poverty that our Sisters met when they arrived has changed. Australia is now a developed nation.

The Sisters of Charity response has been flexible enough to deal with new forms of poverty. Physical poverty will always endure but we must also deal with the poverty caused by narrow-mindedness, prejudice, mental illness, drug addiction and drunkenness, as well as the more familiar kinds of sickness and lack of money.

As long as those Irish sisters didn't force fallen women to work in their laundries, then it's all good.

Good post! Stick-to-it-iveness in the face of a changing world.

Wow! It's good to know there are still wonderful people in the world. Thank you for writing about them. This did my heart good to read.

Hope you’re having a great summer and don’t forget you can find me at:
Elsie

Good article and and instructive. I enjoyed it. I like all the history that you write for us.

Thank you, glad you liked it

Love to hear about groups dedicated to helping others.

Interesting post. Especially the part that points out there are other ways to be poor other than lack of money.