Hello Friday, or should that read good evening Friday since it is nearly 5pm 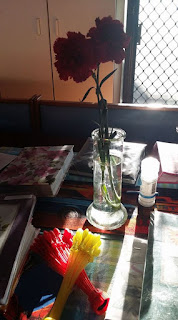 Hello Friday, been a pretty good Friday all in all, I was up at 4.30am again and did 70 minutes of exercise on the Wii Fit and 15 minutes of healing yoga with a program recorded off the telly. I then went to get ready to go shopping, I was in the bathroom applying my make up and I thought I heard Leo arrive and called out to him but no answer, I then had to go into the kitchen to get something and again thought I heard him but didn't see him, I go back to the bathroom and seconds later Leo jumps up from behind me and yells and I scream and he laughs. My daughters and grandchildren love to scare the hell out of me and hear me scream.

Jessica again pushed me around in a wheelchair which was great, it takes a lot out of her because the centre isn't all level so she has to go up and inclines, I really appreciate her doing this I was thinking next week I would see how I go walking but have to say this afternoon my right calf area is very painful and walking is difficult, so I don't know.

While out shopping Jessica bought me a couple of carnations my favourite flower and she bought her nan and her Aunty Sandy a flower each as well, for no reason other then she loves us and wanted to do so.

Last night Tim and I went to bed at the same time around 7.45pm, he had to get up at 3.30am to go to work, anyway at 9pm I thought Tim came around and gave me a kiss (which he does before he goes to work) but when I looked at the clock and saw it was only 9pm thought I dreamt it. Then I heard the motor-bike start and so I got up and walk out to the lounge-room to find Tim dressed for work putting his helmet on, I asked him what he was doing he said “going to work” I told him it was only 9pm, he looks at the clock says “it's 3am” I said it wasn't he then realised it wasn't and went out turned the bike off and came back to bed. If I hadn't heard the bike he would have gone to work 7hrs early and would have felt a right dill. Yes he remembered it all this morning but was clueless as to why he thought it was 3am when it was only just over an hour since he went to bed.

This afternoon while I was waiting for Leo, he (Leo) suddenly appeared and got in the car saying I have had enough and want to go home, I said did his teacher know where he was, he said no but I see Mr Mack and I expect he is looking for me. I said he can't just leave and he had to go and speak to Mr Mack so off he goes and then he comes back and says ok let's go, I said what did Mr Mack say Leo said I don't know but he is walking this way so leave now before he gets here. I didn't and Mr Mack came and spoke to me and Leo and explained to Leo that you cannot just leave because you are fed up and had enough and want to go home, and that the teachers need to know where he is. I don't think Leo got it,

I am sure that Tim's time confusion make for an unsettled night. I haven't mistaken the time 7 hours off but I have woken up a an hour or so early and not been able to go back to sleep.


Hope Leo did get the message about not just leaving when he's had enough. That would be worrisome for him to leave when they aren't aware of it.

I hope by now everything has turned around!

I think Tim must have been so tired to be confused. I don't know if Leo gets it or not

I was cracking up at Leo jumping out and scaring you. I love to do that to my girls even though they're all grown up now. One day they're going to get me back and I'll probably have a heart attack. LOL I've gotten up before thinking it was time and it was still the night before. I was so tired. Maybe Tim was just tired, too. I understand how Leo feels about having had enough. I hope he gets it that he can't just leave, though. That scares everyone!

I hate being scared, I would not be happy with that at all.

I did nothing Friday.
Well, I had two beers.
So...there's that.

I'm impressed. I try to exercise each day, but rarely get that much. You're a rock star.

Leo loves to scare nanna and does it every chance he gets, yes I think Tim was just very tired

I am used to it

Never had two beers, or one beer, can't stand the taste of beer, give me a Southo and Coke any time

Thanks I do feel good after I am done