Some of the downs happening im my family 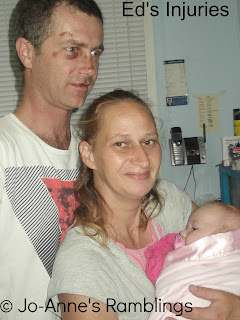 Ok where to start we have had a couple of mishaps in the family in the last couple of weeks the first one was a few days before Christmas when my brother in-law Ed collapsed while out one morning with his daughter Temika. They were visiting a mate of Ed’s and his mates family and Ed was getting himself a drink of water and just fell down, he was unconscious and his mate rang Sandra to tell her what happened.  Ed was taken to hospital and after some test, was told he could go home but before that could happen he had 10 seizures in a short period of time, more test where done and at one stage the doctor was talking about putting him into an induced coma but first they were going to try some medication to stop the seizures. Thankfully the medication worked and after a night in hospital and more tests he was told it looks like he may have epilsey.  Then of course on Christmas Day while slicing the ham he cut his finger.

The next mishap happened to hubby on Thursday night he was paying some bills via Bpay and went to pay $100 off a bill and typed in an extra 0 and didn’t realise till he went to pay the next bill and he thought what the hell………………….then he calls out “darling help”. I went and saw what he had done and immediately called the company who said to call out bank which we did, it looks like we will get the $900 back although it will take up to 21 working days………………..thankfully he had some money in savings to tire us over as that was his full weeks’ pay gone. He felt like such a dill but once it was done it couldn’t be undo, well not by us………….. 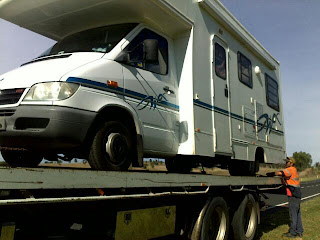 Moving onto Friday my parents left for a holiday in their motorhome but only got as far as Jerry Plains when the motorhome broke down, when dad looked it was fan belt it had shredded around the fan. They rang their roadside assistant mob (kentam) that went out and towed the motorhome back to Beresfield to the Mercedes repair place, where they spent the night in the motorhome.  It cost them $700 for the tow and only $600 was covered by their insurance, it is going to cost $900 for the motorhome to be repaired.

At the moment mum & dad are home my brother Dave went and picked them up as the motorhome will not be repaired till Monday.

Oh, your poor brother-in-law. And I was feeling like I had more than my share of family "problems" this Christmas. My thoughts and prayers go out to Ed and your parents. May they get the strength they need to endure their trials. (I have a cousin who got epilepsy when he was very young. I do hope there's medication that will help Ed!)

Hi Jo-Anne! Will it has definitely been eventful! Oh my goodness that is the scariest thing knowing something is wrong, but it not being able to be diagnosed! Sounds like the outcome was better than expected...I'm glad there's medication for your brother-in-law. Glad your money will be recouped...eventually! And that sure does look like a nice motorhome...hope that it is as good as new after this repair!!! Wishing you the absolute best in 2013!!! Tight Hugs, Aimee

hi, that's a lot of mishaps in such a short amount of time. i hope things improve soon. :)

Thank you my friend Ed is doing fine, they think he may have been having small seizures for a while but no one noticed. My nephew Dawson also has epilepsy but he has absent seizures

Yeah it has mum said dad thought the motorhome wasn't running right but pushed on till it died when he really should have pulled over and had a look at it sooner.......oh well can't be undone now.

Ed is doing much better as far as I know

Yes sometimes things seem to happen all at once, hopefully nothing else happens

WOW. When they say life may have some bumps in the road and we travel they didn't tell us there could be boulders and caverns... LOL. You have certainly had quit the adventures of late. I do hope the New Year brings you better fortune and good health all around. :-)

Hope everything starts to look up for your family. I just hate it when everything goes to hell at once.

Thats a lot of money for a shredded fan belt. I'm guessing they ended up with some overheating issues?

My sister had mild epilepsy. Meds control it just fine for her. She never really had seizures per se, but would just pass out.

Man, that all just sucks. I did the same thing Tim did one time. My bank couldn't fix it and the credit card company wouldn't give the money back even though I caught my mistake and called them immediately. I canceled my account with those wankers for refusing to help me.

Sorry for your troubles.

Things will I have high hopes for a great 2013

Ed didn't have any noticable seizures till after he passed out and was in the hospital.

We are lucky that it looks like it will all be sorted out and we will get the money back, I didn't get mad or anything no point it was an accident and once it was done it was done............

I'm the only one here who can get mad, so I get mad at myself occasionally, but most of the time I just forgive myself because I'm adorable.

Goodness not all is good with your family then.
Oh my, I always wondered what would happen if one put extra '0' when paying online...amazing how they make you wait for your money! Good luck.
Happy New Year to you and your family.

oh dear!! when it rains it pours...we have all had crazy times like that...looking back I wonder how we survived!
Happy New Year!