What I didn't notice 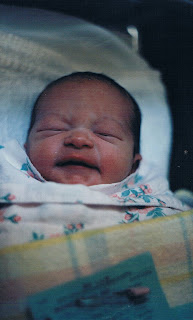 She was born at 3.50am after only 2 hours of labour and not long after she was born I fell asleep. So around 7am I went to the nursery to see her yes back then they still took the baby to a nursery while mum slept after the birth. 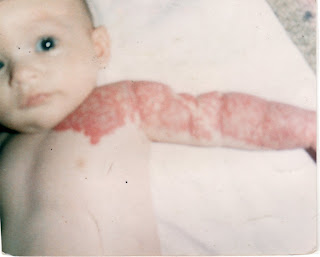 After he walked away I look at Jessica and think to myself how did I not see that this is a picture of her birthmark and honestly I never noticed it when she was first born, when Tim came into to see us a couple of hours later I asked him if he had noticed it and yes he had and I said to him why didn't you say something and he said "I didn't think I had to" 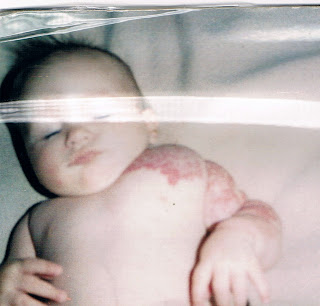 You didn't see it because in mom's eyes a newborn is always perfect. We don't notice pointy heads or swollen eyes or the fact that sometimes they look like little old people when they are first born! They are simply perfect in our eyes. She was such a beautiful baby. Don't you just wish you could go back for just a little while? I would love to hold my kids like I did when they were teeny tiny.
Blessings, Joanne

Joanne has said it perfectly! Jessica really was a very beautiful baby. They all grow up far too quickly though, don't they?

Looks perfect[ly beautiful] to me. I sure wouldn't have noticed. Wallene has birthday marks too - I like 'em. And they have never bothered her.

That is one gorgeous baby you have there Jo Anne. I can see why it wouldn't have registered.

I wouldn't have noticed either Jo-Anne, but it doesn't matter it's what is in the heart. Looks are skin deep :)
Beautiful baby was your daughter :)

You didn't notice because love is blind. Seriously. I love this post. :)

joanne said it all to us they are perfect no matter their impertection because they are our children. hugs

I think the moment we first see our children come into the world, we actually transcend into a different state of consciousness. You saw her natural beauty with no judgement. Only when someone decided to name the variation could you recognize that interpretation. The mom lens is why I have difficulty sitting through parent teacher conferences. I see my child the way God intends me to see them without judgement or comparisons. Thank you for sharing the beautiful photographs of your sweet baby girl. This will stay in my mind for a long time.

Dear Jo-Anne
Oh, birth-mark. I heard it isn't a problem to worry so much. Haha, I don't know things about baby without being blessed one. But your daughter "Jessica" sure was a cute little baby♡♡♡
Do you know we have Mongolian (blue) spot on our bottom. but disappear untill 3 or 4 years old. Human body is Mysterious,

Oh, you must miss while your children were baby♬♬♬

Hugs to you, Orchid*

Jessica was a beautiful little baby. I can quite see why you wouldn't have noticed anything. I agree with Joanne, I would love to hold my daughters again as little babies. Each new baby is a tiny miracle, and Jessica was certainly one of those.

She's a beautiful baby--that's all you needed to notice.

Yes I just saw a perfect beautiful baby and yeah I have seen a couple of babies who did look like a little old person when they where born......lol

Yeah to have the chance to hold our children as babies again is something most of us would love to be able to do.

Jessica was never botherd by her birthmark as we never drew any attention to it, it was just part of her.

Yes she was beautiful but I think all babies are beautiful.

Yes love is blind which is one of the reasons parents do not see their childrens faults...

Yes Joanne did say it well

Yeah well said I found parent teacher interviews annoying at times I did not like to be told my children had to change to suit the teacher.

Jessica was never bothered by her birthmark she had to have an opperation to remove excess fat from the area so her breasts would developed noramlly.

Yeah I would love to hold my girls as babies again, but thankfully I have grandchildren who I can fuss over.

All babies are beautiful

I have a similar armbirthmark and it's ok to me. Don't worry. She is beautiful! ;)

I have a similar armbirthmark and it's ok to me. Don't worry. She is beautiful! ;)

Thank you I think so she is my special girl