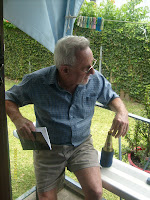 I have been a bit slack lately I just haven’t felt like doing much anyway lets get to the point my dad is doing much better now saw him yesterday when I saw him he looked good made me feel better as I have been very worried about him.

We are having lunch today but mum said she isn’t cooking as she doesn’t feel up to it so we will get either pizza or KFC. Dad isn’t eating much at all but as mum said that is normal she was the same after she had her op.

Poor Dad. Hope he isn't in pain too much longer. Glad you are feeling less worried.
New look blog-nice.

Hi dad is starting to look better each day and it makes us feel better seeing him looking so good.

HI JoAnne..glad op went well and hope things settle soon for your dad..being in pain is not much fun.