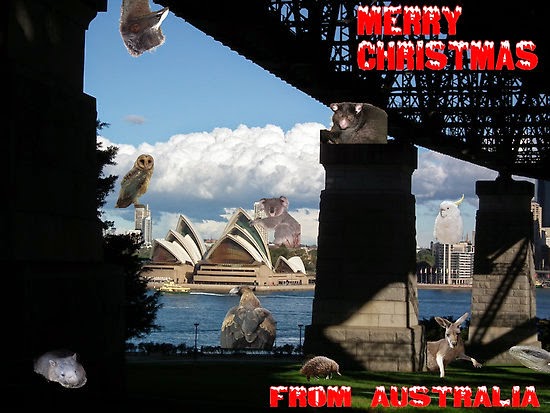 Christmas is always the most exciting time of the year. School children get six weeks holiday, and many professionals close their office from Christmas eve to the Australia Day Public Holiday on 26th January, so many families are in a holiday season over this period.


Businesses and shops close on Christmas day and Boxing Day, however the major retail centres open after Christmas for clearance sales on all Christmas stock that did not sell. This has become an important part of Christmas for many bargain shoppers. Some people now wait to buy their gifts after Christmas at the sales. Those families that can afford it head for coastal resorts and beachside caravan parks for the holiday period.
December is one of the hottest months in Australia so outdoors sports like swimming, surfing and fishing are common and easy cold meat & salad dominates most meals.

Most Australian Christmas traditions have derived from our British beginnings, European influences and later the American commercial influences

The countdown continues with Carols by Candlelight in a park nearby from mid December. (see below)
On Christmas eve, children leaving out the Christmas stocking, or pillow case (because you can't fit much into a stocking in this commercial world).

Santa still comes silently down the chimney and eats a piece of cake and takes a drink left out for him before he goes.

Santa rides 'a miniature sleigh', with eight tiny rein-deer". (although in the Australian outback it is too hot for the reindeer and Santa is pulled by Six White Boomers.

The small children are brimming with so much excitement that they can't get to sleep on Christmas eve, and then wake you Christmas morning, when you have hardly closed your eyes, with excitement and wonder as they rip the wrappings to pieces.

Then comes a formal gathering around the Christmas tree as the presents from each other are handed out by the patriarch of the family, wearing a Santa suit or at least a Santa cap and a "tinnie".
Christmas dinner, served at lunchtime on Christmas day, is at Grandma's home, (while she is still able bodied).
The dinner table has a special Christmas tablecloth, Christmas napkins and napkin rings that you didn't know she had. Also bonbons or Christmas crackers, streamers and balloons are added to the dining room and lollies and soft drinks are already on the table. Often the kids are on a separate table on the verandah.

The traditional Australian Christmas dinner had been the English style roast Beef or lamb sometimes also a turkey, with Gravy and baked potatoes & pumpkin followed by plum pudding and custard, which grandma used to fill with little silver thripences or sixpences.

In recent years more and more busy mothers are not subjecting themselves, and the family, to the heavy baked dinner on hot days and go for the cold meat and salads. Cold turkey with cranberry sauce and ham with apple sauce are now the leading Australian meat dishes for Christmas. But the steaming Christmas pudding with hot custard is still common and much, much, beer is consumed in the delirious heat.
at December 25, 2014

Our Christmas lunch consists of Prawns,Moreton bay Bugs, Fish, and salads. Aussie cold lunches are the best. We followed it up with pavlova, ice cream , christmas cake, and cookies.

Yes I think most people in hot weather like a cold lunch ours is a mixed lunch with cold meat, salad and hot roast potatoes just the frozen ones cooked in the airfryer we rarely have desert

I really was shocked by the six-week holiday until I was reminded- Christmas is a summer thing for you. The heavy dinner sounds wonderful, though I can see the point about the cold one. Hope you had a good one!

Yes the children love having a long break from school, when I was a child I didn't realised that some people worked Christmas Day as dad always managed to have between 4 and 6 weeks off over Christmas