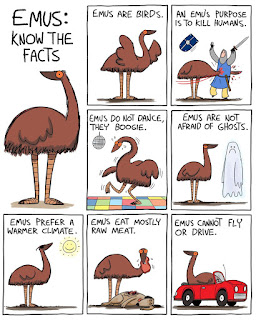 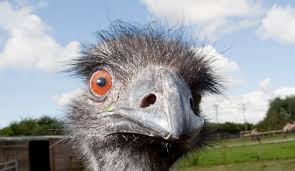 Hello Wednesday it is after midday so it's afternoon here. This weeks creature because Wednesday is creature day, is the Emu.

The Emu is a large flightless bird it is the largest bird in Australia, second largest in the world. They stand at 2 metres tall, they have a long neck, short sharp beak 2 sets of eyelids one for blinking one to keep the dust out. They are covered in soft feathers.

They live for around 10-20yrs in the wild but up to 35yrs in captivity. They like to eat insects such as grasshoppers, beetles and cockroaches. 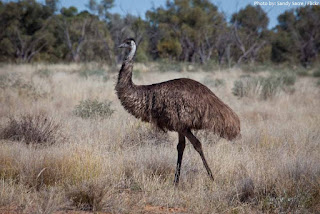 Once the female lays the eggs the male will sit on them.

They are rather a cute bird, they have a lovely face but their feet can be vicious on humans.
Remember one of them poked it's nose into a caravan up the middle, was rather funny at the time.

That's really something that the males sit on the nest. They are such an odd looking bird with an almost cute face. :)

Interesting facts. I didn't know that the males are the one sitting on the eggs.

I love that cartoon...

I loved that - I really do enjoy learning about different things.

Those are some really big birds! I love that they lay the eggs, then the males sit on them.

Margaret......yes I wouldn't like too be in a fight with one