Well Monday is here yet again, how was everyone's weekend?

Mine was somewhat busy, Saturday saw Kathy arriving here at 8am to dye Natasha's hair only to find Natasha still in bed asleep, Kathy was not amused I can tell you. Then she goes to start her hair only to find that Natasha was nearly out of the product she uses to bleach her black roots this saw Natasha asking me if I would go and get more I said yes were did I get it from she said Price Attack or Priceline so I go to Charlie ( Charlestown Square shopping centre) only to get there at 8.50am they stores didn't open till 9am so had to wait. I went to Priceline first so I could get Leo's Webster pack for school while I was there. Well it turned out that Priceline didn't sell it so I had to go to Price Attack they didn't sell it any more so headed down stairs to the Hair Warehouse they are no longer in the square. So I then had to drive to Glendale shopping centre about 15 minutes away to the Hair Warehouse store there and they had it I got the last jar of the damn stuff they had in stock.

I then get home and cook a hot breakfast for the family, bacon, eggs, hash browns after breakfast I had to hang Natasha's washing on the line, ok didn't have to do it I chose to do it because she was busy.

In all this I had my mum ring me for a chat, she wanted to tell me what a bastard my sister's partner is the dickhead smashed her phone (Mobile) with a hammer because he found out she was on Facebook what a bastard, he bought her a new phone but wanted one that didn't have Facebook on it but of course my other sister managed to find a way she could get Facebook on it so who got the last laugh. I wouldn't put up with that shit, Tim doesn't understand Facebook but he wouldn't tell me not to get on it he does say not to post stuff about him on Facebook which I don't so all good. Tim also doesn't get blogging and would rather I not talk about him in my blog posts but too bad I do and since he doesn't read the blog he doesn't know what I say about him which I guess is a good thing.

Anyway back to my weekend, Sunday was Father's Day here in Aus, which meant that Tim and I went over to my parents place for lunch we had KFC which of course mum and I went and bought and of course when we get back no one has cleared the kitchen table to set it for lunch as per usual, followed by a nice sponge cake I picked up from the supermarket that morning. Dad likes his sponge cakes hell I like sponge cakes prefer it over mud cake just saying. 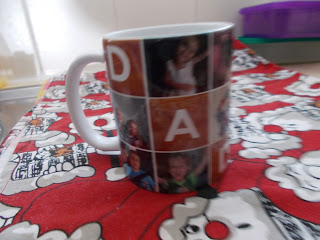 Tim was quiet pleased with is Father's Day presents I got him this mug and a T Shirt that said
“ I want you to know someone cares, not me but someone” I saw the shirt of Friday and it just sounded like Tim. Leo got him a cap that said “ Australia's Greatest Dad” and a keyring that said “I love Papa” Jessica got him a $100 gift card for Flight Centre to go towards a holiday and Natasha got him a $50 gift card from Supercheap. 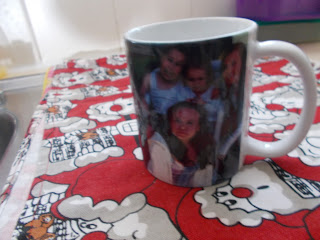 I gave my dad two books and got in trouble from my sister because I didn't get a gift for her to give him she didn't remind me she needed anything I need to know these things if I am to arrange something.

Anyway Jessica and Leo didn't turn up here to see Tim till 5pm and didn't leave till around 8pm while she was here she was asking me when I was going to get a new phone (mobile) because mine was so slow I said I didn't know after talking for a bit she asked if I would like to have her old Samsung Note I said yes so now I have a newer and faster phone and my old one I have given to Leo to play games on and watch Youtube on.

Natasha has a new man in her life and she wants him to sleep over on Friday and Saturday nights but Tim said no he doesn't know the guy and doesn't want him to stay over, I understand this as I understand how Natasha feels when she asked me I said I would talk to Tim and see what he says but when he said no well that was that, but of course Natasha says she helps pay the rent, she doesn't she gives me only $50 per week board money. It is her fathers income that pays 99% of the household bills and as such he has the right to say whether he wants someone to stay over but of course she doesn't get that she thinks he is being unfair and has said to me that he has to pull his head in and get over it if she wants someone to stay they can stay she is so wrong but she doesn't get it.


Ok I have rambled on long enough for one post about my weekend, till next time stay happy and safe.
at September 05, 2016

Our Fathers Day is in June, so no celebrations for us. Although today IS Labor Day which means it's a holiday.
So, there's that.

A public holiday is always a great day not that I get any as being a mum, and nana is a full time job with no holidays unless I go away and then I get a holiday which is why I like taking holidays lately

Damn right it was nice and the cake dad really liked

Sound like the men in your family had a nice day. Congrats on getting a newer phone. It's always fun to get more current devices.

Yes it is nice to get a newer phone, it is a lot faster then the old one.