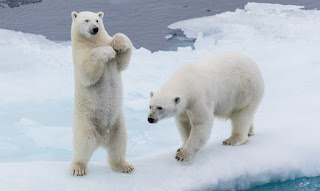 Another week another creature this weeks creature is the polar bear, which at 3m or 10ft tall and weighing up to 1000kgs or 2200lb on its hind legs the polar bear is the biggest most powerful carnivore to walk the land.

They also have some powerful weapons in their enormous paws each up to 30cm or 12in across, with five strong, sharp, curved claws. Its massive jaws have long sharp teeth for slicing through the thick, blubbery skin of seals which is its favourite food.

If it feels threatened it will use its ferocious hunting skills to defend itself, no wonder that whenever a polar bear wanders into an Arctic town a warning goes out and people stay indoors.

They are nosy and curious and like to investigate human settlements for food, once a film crew were trapped inside a hut for several hours while a nosy polar bear pressed its face up against the window.

Amazing creatures and beautiful to look at in photos.

I remember reading not long ago that a town in Siberia on the arctic coast was laid siege to by a couple dozen bears...

They are huge and powerful. Bigger than grizzly bears.

Never surrender! Land contributing is certainly not a straightforward thing to bounce into. There's a long way to go, and you ought to expect many knocks and wounds en route. Be that as it may, with tolerance and expanded aptitudes from playing the game, you'll become better and better at it. AAP KI NEWS
AAPKINEWS