Another week has pasted and I am still suffering with hot & cold flushes.

Up and managed to dress myself but couldn't even manage to eat a egg & cheese roll.

Wrote 6 letters, vacuumed out, unpacked the dishwasher and sorted out the clean washing.
Been another hot day.
Started back at aqua today it was good.

Monday and Leo didn't go to school, neither did Daemon so I have them here while their mums go shopping. Both were well behaved.
Leo is here for the night, he is somewhat hyper as not medicated.
Both Leo & Blain are getting along again.

Tuesday morning and I had a shocking night last night I woke up at 11.30pm to go to the loo and afterwards I had trouble going back to sleep. I had hunger pains and at 12.30am I got up and ate a sherbert cone, which helped

Found Leo asleep in his bed not on it, he had removed the sheets of wood under the mattress.

I have been sick all day and had two naps during the day and also threw up a bit and had to get Tasha come and get me off the bath room floor.

Had another bad night at midnight I took a Valium and it did help.
I went to the doctors this morning he has done a referral to a psychologist at Broadmeadow. I also had to have a blood test for rheumatoid arthritis.

I am still unwell and went back to bed for most of the day.
I am going to bed at 5.45pm.

Thursday I am as sick as, spent all day in bed, too sick to do anything. Leo is here till Tuesday while his mum is at her friends hens do in Casino.

Friday at 2pm I got a phone call from Tasha she has had an accident while picking Leo up from school, in our car.

There is a lot of front end damage but no one was hurt thankfully.
Tim was angry but more worried about Tasha.

He rang and lodged a claim with the NRMA that will cost us $695 but of course our premiums will go up next year.
At last I am starting to feel a bit better but I am still far from better about 50% better.

Michael sent Tim a message saying that he would have Tim's back in getting Tasha to pay the excess for the car. However, both Tim & I know we don't have a hope in hell of getting money from Tasha as she just doesn't have it.

We took Leo over to his house so he could clean out the bunnies cage and feed them. He did that while Tim & I went to see dad.
When we got home I noticed our neighbour's daughter was cleaning out her house and had a wheelchair there so , asked what was she doing with it and she said we could have it for $50 so Tim bought it for me.

I am going back to bed at 6pm as I feel like shit.

You have a lot on your plate- I am so sorry you feel so bad. sandie

Sounds like a very rough week. I hope next week is better.

I am so sorry to hear how bad you are feeling. Take care of yourself! This year has been bad enough already. I'll be praying.

I'm so sorry for your illness. I sure do hope you can find some relief and get better soon.

Sandie......Yeah a lot going on as usual

Hello everyone here we are at another Aussie Wednesday and this week's creature is the Quoll. Quolls are carnivorous mars... 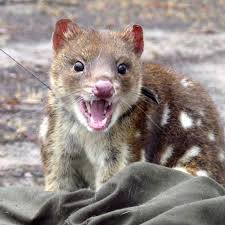