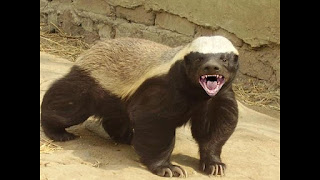 Hello world, how is your Tuesday going?

Life here is good, it is a stinking hot day again.

Being Tuesday means it is creature day and today's creature is the Honey Badger, heard of it?????????

The honey badger is smaller then a wolverine which it is related to, but is also tougher and even less scared. It is officially the world's most fearless animal, this ferocious fighter has powerful jaws and claws. It also has thick, rubbery skin that can withstand insect stings, snake fangs and the teeth of crocodiles and big cats.
It has very loose skin so if it is grabbed it can easily twist around and fight back forcing the enemy to let go.

They love to eat and will eat anything including, birds, hares, foxes as well as antelopes and jackals and even a tortoise yes a tortoise it just crunches through the shell. A deadly venomous cobra or black mamba not a problem.

Nothing scares them if a lion tries to steel it's food it will have a fight on it's paws .

That's a very scary animal, not one I would like to meet.

Good grief not a nice creature to come across Jo-Anne.

Oh dear, it looks really scary! I wouldn't want to be anywhere near it. Have a beautiful day and week!

Yikes. No, I wouldn't want to encounter this creature, either. Definitely ferocious and frightening!

Well we sure will stay out of the way of that animal. But interesting facts about it. I have never heard of it before. You have a really good day.

I have to look and see where they ARE!

I have heard of the honey badger but had no idea it was so nasty. "Honey" in the name made me think it would be sweet.

Oh yes, I have heard of the notorious honey badger. One of the nastiest creatures on earth--LOL! Have you ever seen the video? So funny! There is swearing--warning!

We have one in our zoo... when I saw him last it was, as you say, a stinking hot day and he was passed out.

Rita.......Didnn't see the clip till you posted it here, it was a good laugh

Wow, I had heard of the Honey Badger, but never seen one or learned anything about them. I had always pictured them as calm sweet animals (maybe because of the "honey" in their name). I guess I was way off.

So the honey part is an oxymoron?

This is very good blogspot theme, where you can find out the best theme and latest designs Very good.
play bazaar
satta king

Purchasing these and setting them up can net you large benefits. Over the long haul, you will make much more by following the technique than you would by buying homes that need practically no work.
AAP KI NEWS
AAPKINEWS 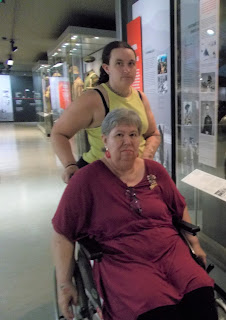